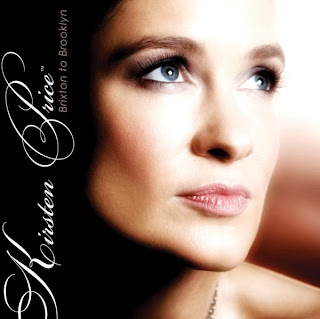 Kirsten Price - Brixton To Brooklyn
In case you didn't fall in love with her the first time, Kirsten Price is walking by again.  The seriously soulful British-born vocalist ups the ante on her sophomore album, Brixton To Brooklyn.  Price came to our attention last year with her debut effort, Guts & Garbage, showing a depth of talent, a smoldering voice and a penchant for material that was danceable and commercially viable.  Price is all of the above and then some on Brixton To Brooklyn, keeping to a taut pop aesthetic while diversifying her sound with the power chords of rock and roll and the dance beats of a club maven.
Brixton To Brooklyn opens with "With Or Without You", an urgent bit of rock and roll with a dance beat and featuring Price's soulful voice.  It's fresh, hip sound with enough attitude to fit in alongside bands like Evanescence and Paramore but also appeal to Top-40 radio.  The song is extremely commercial in sound without sounding like that was the point.  The chorus will stick with you.  "Moving On" finds Price in restless territory.  Vocal doubling and heavy production tricks are used, but Price's voice crackles with a fire that can't be generated by a computer as she explores heartache and denial.  "Give That Girl" is edgy pop with dark shadows, ripe for remixing for the club scene.  It's not Price's best songwriting but is very commercially viable for more dance-oriented outlets.
"Broken" finds Price traveling down a more cynical path in a down-tempo ballad that sounds as if it were written specifically for radio.  Price's voice is outstanding as always, but "Broken" just doesn't stand up to the rest of the album.  "Take Me To The Top" is pure dance/pop, ala Kylie Minogue but with more edge.  It's an overly simplistic songwriting turn that could become a big hit.  "Gone" features some interesting classical-style piano work but is otherwise unremarkable.  After "Gone" things devolve into a pure dance pop record that's more about sinewy sensuality than concepts such as melody, composition or thoughtful lyrics.
Brixton To Brooklyn starts out strong but defaults into a simplistic dance cycle for the second half of the album.  This is what Price is aiming here for, and that's understood going in, but Price's past material suggest she's capable of much more than such cynical attempts to be radio and club friendly.  By taking this path she makes herself a part of the pack when she has the potential to stand out.  Brixton To Brooklyn is remarkable for Kirsten Price's voice and presence.  Some of the songs here will undoubtedly make some noise in the dance clubs and on popular radio.  Price is successful in attaining the sort of low hanging musical fruit that is easily accessible and consumable, a path that's certain to keep bread on the table.  But if you listen to the first half of Brixton To Brooklyn in particular, you'll quickly realize she's capable of so much more.
Rating: 3 Stars (Out of 5)
Learn more about Kirsten Price at www.kirstenprice.com or www.myspace.com/kirstenpricemusic.  Brixton To Brooklyn is available digitally via iTunes.
Posted by Wildy at 5:00 AM