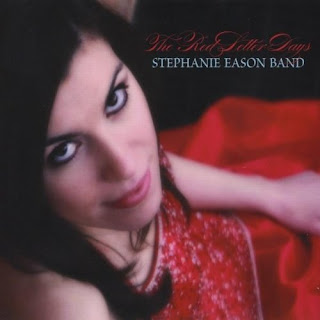 The Stephanie Eason Band - The Red Letter Days
2010, Stephanie Eason Band
Arizona has gotten some bad press this year; but the Indie music scene in cities such as Phoenix continue to churn out talented acts who succeed locally and push at the national bubble.  One such act are new country stalwarts The Stephanie Eason Band.  Eason's voice may be the glue that draws the band together, but Stan Hitson (lead guitar/vox); Mike Galli (pedal steel/vox/guitar/harmonica/mandolin); Brandon Kinser (drums) and Eric Gilboe (bass/vox) all bring distinct talents and songwriting skills to complement Eason's voice, fiddle and acoustic guitar.  The Stephanie Eason Band released their debut album this summer, a collection of twelve original tunes called The Red Letter Days.  Blending new and classic country, rock, blues and bluegrass, The Stephanie Eason Band truly fit the post-genre movement perfectly.
Stephanie Eason has the sort of voice that makes people stop and listen; an alluring alto full of the goodness that country music once personified tempered with a dash of the joyful deviltry that always made it a fun genre.  The Red Letter Days opens with "Charlotte To Phoenix", a song about jumping on that once big chance and holding on when it presents itself.  It's a leap of faith centered on love and being in the moment.  "It Ain't Love" gets to the point quickly, a forward come-on song that is likely to earn The Stephanie Eason Band some serious attention from commercial radio programmers.  The song is well-written and performed, and should crossover easily between country and pop formats.
"Endlessly" is a song about falling in love and the anguish brought on by an uncertain outcome.  Delivered in a fine country/Americana arrangement, "Endlessly" is a tremendous bit of songwriting that mixes imagery and emotion in almost magical proportions.  "How To Start A Fire" is a classic country tune about young love, sparks and the life their memory can take on years later.  Tempered with southern rock guitar work, this tune has real commercial legs.  Don't be surprised if you hear it in a movie or on the soundtrack of a television show in the near future.  "Happily Ever After" offers common sense love advice in song while debunking the prince charming archetype.  The song is well written, but it's the hook in the chorus that will grab you and keep you coming back.
"He Don't Know" is all about being in love with a friend who's clueless and the daily struggle between the fear of telling him and the torture of staying silent.  Delivered in a classic country arrangement, Eason handles the vocal with style and grace.  "It Was A" is a catchy rockin country tune about all of the wrong roads we travel in out paths to find love.  The song is very radio ready with a pop sensibility that's tremendous.  "Be Careful What You Ask For" tackles infidelity from a non-traditional angle; a reminder that some things just don't come with a warrantee.  The Red Letter Days closes with "Country Time", with The Stephanie Eason Band getting back to their old-school country roots on a danceable and fun tune about building love the old fashion way.
The Stephanie Eason Band has already gained a lot of attention in their home state, but The Red Letter Days has the band poised for the sort of attention that comes with stepping onto the national stage.  Whether the big break comes with The Red Letter Days, or whether the album simply opens the door for it to happen next time around remains to be seen, but there's no denying that Stephanie Eason is a first-class vocalist and front woman, and her band could walk onto any stage on Music Row and be welcome.  The Red Letter Days is as special as its name.
Rating: 4 Stars (Out of 5)
Learn more about The Stephanie Eason Band at www.stephanieeason.com or www.myspace.com/stephanieasonband.  The Red Letter Days is available from Amazon.com as either a CD

The album is also available from iTunes.
Posted by Wildy at 5:10 AM

I've seen this group live and they put on a great show - very high energy and fun to watch! They can fill a dance floor and ALL of the musicians are very skilled. Highly recommend this group!