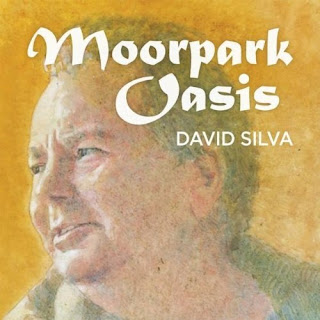 David Silva - Moorpark Oasis
2010, Moorpark Song
David Silva was on a path to a career in music in 1985 when he became a father and his priorities changed.  Living in New York City at the time, Silva returned to his native California with his burgeoning family and pursued the American dream.  Twenty years later Silva heard the call, and pulled his guitar out to play.  He hasn't looked back, playing at numerous venues in northern California over the past five years.  Now comes Moorpark Oasis; Silva's debut album is a collection of songs he's written over the years.  Silva's songwriting style and smooth delivery have garnered him comparisons to artists such as John Prine, Lyle Lovett and Loudon Wainwright III.
Moorpark Oasis opens with “Guitars & Shady Ladies”, Silva’s take on the good life.  The song is entertaining, autobiographical and funny; a look at how he got to where he is in life.  The song is catchy with a great melody.  “Garlic” looks back on a relationship past with longing and regret.  It’s a paean to the little things we carry away from us, and the things that can touch our lives even years later.  “Coffee Shop” is a love song full of deep experience and emotion.  Silva’s arrangement is haunting and lovely.  “September Bride” is a wonderfully descriptive vignette, almost a Rockwellian perspective in music.  Silva’s words craft images that live in your mind.  “Blessing” is a song about the gifts that fill our lives, many of which we never realize.  “It Will All Be Perfect” offers the stark perspective of one in an abusive relationship.  The song is a bit unsettling in its honesty and well written.  Silva closes with “Life Is Good”, the celebration of the end of a relationship where she tried to change him. The song is funny and entertaining, turning anger into comedic commentary.
David Silva combines humor and honesty on Moorpark Oasis, wrapping them up in catchy and memorable folk arrangements.  Silva entertains without histrionics or flash; just a guy and his guitar and a wealth of life experience delivered with a twist of wit and a mischievous grin. Moorpark Oasis comes with high recommendations.
Rating: 4 Stars (Out of 5)
Learn more about David Silva at www.daveworldonline.com
dave@daveworldonline.com.  Moorpark Oasis is available as a CD or Download

A digital version is also available via iTunes.
Posted by Wildy at 6:31 AM

Really effective info, lots of thanks for the article.