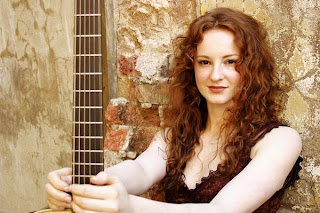 Alesa Lajana - Secret Garden
2010, Alesa Lajana
We were lucky enough to become acquainted with Australia’s Alesa Lajana last year by way of her debut album, Celtic Gypsy.  Lajana shows a remarkable depth of talent, not only as a singer and songwriter but as a guitarist.  It’s rare to find an artist who shows virtuosic tendencies in three distinct areas, but Lajana is very much the real deal.  Alesa Lajana recently released her sophomore album, Secret Garden, building on the utter beauty first unleashed on Celtic Gypsy.
Secret Garden opens with “Lightning Ridge”, a baroque Americana composition with an unusual mix of sounds.  Lajana doesn’t ease into the album, blending highly complex musical ideas into the guitar part juxtaposed against a darkly beautiful vocal line.  There is a sense of mystery and foreboding here, making “Lightning Ridge” an intriguing and vaguely unsettling start.  “Brolgas Dance” is a beautiful composition infused with a light dance beat.  Lajana sets her voice against a lush electronic/acoustic arrangement that speaks of tension, release and the mystery of nature.  We get the full flavor of Lajana’s guitar skills on “Umubathina (Rain Falling)”, an extremely complex and inspired solo piece that retains a clear theme in spite of its intricacy.
“Secret Garden” again finds Lajana playing her voice against her guitar, with an ethereal melody dancing over a dark and complex guitar Spanish/classical guitar hybrid.  This is one of Lajana’s finest moments in her short career, which is actually saying quite a lot.  “Get Me Out Of Here” is a kiss off song swept in baroque armament and honed to soft edges with Lajana’s guitar strings.  The mix of power, beauty and grace here is stunning.  “Wild Flower” is a song of longing with intricate and articulate guitar work.  The introduction of strings here is a delicate touch that finishes the song off perfectly.  Lajana busts out a country/Appalachia feel on “The Blind Heart”.  In a sign that Lajana might keep topping herself “The Blind Heart” is easily the best work on the album.  The instrumentation is amazing; giving the song a subtle and refined but incessant feel that can’t be ignored.  Lajana shapes words into pictures like a sculptor working with clay.  “The Owl The Fairy & The Grasshopper” is a dark musical poem constructed with layered sounds and dark edges against a light and airy vocal line.  The instrumental work here is brilliant.  Lajana closes with “Notnehs Monster”, an out-of-the-box guitar instrumental that would make William Ackerman proud.
Alesa Lajana is one of the most impressive, all-around artists to have graced this page in the almost three years we’ve been up and running.  Working in the unusual musical milieu than runs where classical, new age, Americana, Celtic (Irish  and Scottish), blues and pop meet, Lajana is among the most original and inventive young artists in music today.  Secret Garden has the potential to take Alesa Lajana far beyond her native Australia.  Don’t pass this one by.
Rating: 4 Stars (Out of 5)
Learn more about Alesa Lajana at http://www.alesalajana.com.au/ or www.myspace.com/alesalajana.  The only way to get Secret Garden is through Lajana's sales staff.  You can reach them at sales@alesalajana.com.au.
Posted by Wildy at 5:10 AM