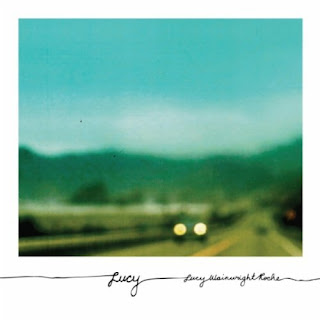 Lucy Wainwright-Roche - Lucy
2010, Lucy Wainwright-Roche
Lucy Wainwright-Roche comes with quite a pedigree.  Her father, Loudon Wainwright III is something of a legend, and her mother Suzzy Roche was one-third of the sisters folk group The Roches.  Lucy is half-sister to Rufus and Martha Wainwright, each accomplished singer/songwriters, and Sloan Wainwright and David Roche all have their own branches on the family tree.  Perhaps the most surprising thing about Lucy Wainwright-Roche is the fact that she didn't plan on a career in music.  Wainwright-Roche got her Master's Degree in education in 2006 and spent some time teaching elementary school in New York City.  By 2007 the family vocation was exerting too insistent a pull, and Wainwright-Roche decided to pursue music full time.  Three independent EPs later, Wainwright-Roche has won the Falcon Ridge Folk Festival's Emerging Artist Competition (2008), the Grassy Hill Kerrville Folk Festival's "New Folk Singer/Songwriter Competition", and a 2008 Independent Music Award for Best Folk/Singer-Songwriter Song ("Snare Drum").  On October 26, 2010, Lucy Wainwright-Roche releases her first full-length album, Lucy.
Lucy opens with "Once In", a metronomic and stilted series of recollections that have an almost stream of consciousness feel to them.  You might have a hard time following her train of thought here, but Wainwright-Roche's voice makes everything alright; a sweet soprano that soars in airy undertones and lights perfectly on each note and word.  "Open Season" explores loss through memories of what has been and speculation of what might be.  It doesn't take long to realize that what you're hearing is far above and beyond the call of your typical folk singer/songwriter.  Wainwright-Roche isn't a strict storyteller, no.  She's more of a musical impressionist, mixing emotions, moments, people and events into a musical milieu where shading, texture and sound tell the story, while Wainwright-Roche's thoughts and apt attention to detail move the story along.
"Early Train" explores the opposing dreams that sometimes tear a relationship apart or keep it happening from all.  The melody Wainwright-Roche has constructed is masterful, and her lyric touch is subtle and refined but misses no minute detail of the moment she's describing.  "The Worst Part" is a heart-to-heart monologue written to someone who's broken her heart.  Wainwright-Roche delivers an honest diagnosis of the relationship that's not so much about blame as it is facts, and then admits that the love has never gone.  There's a vulnerability and honesty here that's palpable, and it's nearly impossible not to empathize and like the singer/songwriter in this moment.  "October" celebrates a moment on the relationship timeline, the zenith of the relationship "we're happy as we're ever going to be".  It's a light and breezy moment brushed with the intangible knowing of reminiscence and features special guests the Indigo Girls.
"I-35" is a musical oil painting where Wainwright-Roche's impressionist tendencies come to full fruition.  The song is presented as more of an open-ended question than a story, but the spaces in between are filled with pure beauty in the arrangement and Wainwright-Roche's nearly carefree vocal wanderings.  "Accident & Emergency" is a straight-forward reflection of one incident involving a loved one.  It's here that you'll see the pure magic in Wainwright-Roche's songwriting.  "Accident & Emergency" takes a banal moment; one that would not ordinarily memorialized in song, and turns it into a beautiful and moving experience.  If Wainwright-Roche has achieved one pure moment as an artist, it's here, where she serves as a perfect mirror for the world around her while painting it in an affectionate pastiche.
All of that being said, "Mercury News" is the best pure songwriting on Lucy, with Wainwright-Roche showing a delicious pop sensibility in a song about a secret relationship "meet me by the water / someone's wife and someone's daughter / none of these will be my name today").  Everything works on this song, from the pop hook, the country-tinged arrangement or the picture-perfect lyrics.  On "Starting Square" Wainwright-Roche turns impressionistic again in a relationship song that explores the angst of second meetings.  This sets the listener up for Wainwright-Roche's vocal knockout, a lyric cover of Paul Simon's "America".  It's here that listeners are treated to the sweet, soaring soprano voice of Lucy Wainwright-Roche in its airy, flowing beauty.  Simon fans will love what she does with the song, which is reverent to the original but shines with Wainwright-Roche's personality.  Lucy closes with Elliot Smith’s "Say Yes", a duet with ­­­­Ira Glass that is well done but seems very out of character with the rest of the album.  "Say Yes" is a post-break-up song that sounds like it may have been cut live-in-studio with little in the way of touch-ups.  As such it proves Wainwright's voice to be as beautiful and sweet as it sounds on the rest of the album, while Glass essentially serves as a vocal foil.
The prodigal child often seems like the most welcome.  Lucy Wainwright-Roche's divergence from the family path was brief, luckily for us.  Wainwright-Roche's subtlety and panache are matched by her ability to craft impressionist scenes made from musical notes and words.  On Lucy, Wainwright-Roche takes everyday moments and emotions and turns them into works of utter beauty.  Lucy may seem somewhat mundane on first listen, but the album grows about you and sucks you in.  Lucy Wainwright-Roche has created a quiet masterpiece.  Lucy is a Wildy’s World Certified Desert Island Disc.  Don’t miss it.
Lucy drops on October 26, 2010.  You can pre-order downloads from Amazon.com.