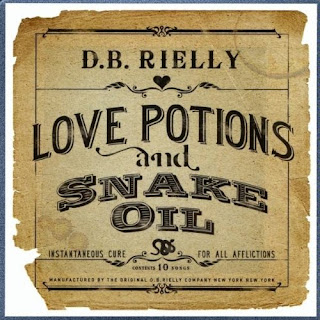 D.B. Rielly is a standout singer, songwriter and composer, but he's also a brilliant multi-instrumentalist who has appeared on 40 independent recordings and films. Rielly also has a wicked sense of humor that shows up in his songwriting. Treading the machismo line between alt-country and Americana, D.B. Rielly serves up ten memorable tracks on his latest album, Love Potions And Snake Oil. Rielly's instrumental work has previously been featured on recordings by B.B. King, Chubby Checker, Paul Schaffer and The Boston Pops.

Love Potions And Snake Oil opens with "One Of These Days (You're Gonna Realize)", a charming song to someone who's wasting their chance at love. Rielly's zydeco arrangement is highly danceable and fun; you won't be able to sit still. "Don't Give Up On Me" plays on old school country song, veiled in a melancholy that's tangible as you listen along. Rielly's voice that of a melodious everyman, full of emotion and texture (ala Lyle Lovett). "Save All Your Kisses" is a piano ballad; a classic love song that should be a mix-tape favorite for the country/folk set. It's a brilliant bit of songwriting, showing the depth of Rielly's talent as a craftsman of word and song.

"I Got A Girlfriend" blends country and zydeco in a disturbingly funny tune about picking out the right girl and bringing her home by force. The lyrics here would be disturbing if it weren't so obviously meant to be funny. Rielly takes listeners to the edge of good taste and beyond with a reference to 'fava beans and a nice chianti' as a counterpoint to his actions. "Loving You Again" is a delicious little tune about recidivism of the heart in a catchy country/rock arrangement over a galloping drum beat. Just try to get this song out of your head. Rielly digs into some delta blues on "Changed My Mind", a highly entertaining all-acoustic affair that makes Rielly sound like he was born of the blues. Rielly sticks with the sound on "Got A Mind", a song of vengeance born of love where justice fails before justice is done.

Zydeco, honky-tonk style is the order of the day on "We're All Going Straight To Hell"; a song about a preacher who makes his career out of condemnation. Rielly's band is as taut as a wire as he questions the real motivations (and eventual destination) of the clergyman in question. Love Portions And Snake Oil closes with "Love Me Today", a melancholy love song born of loneliness and desire. Rielly is at his best here; emoting in an entirely believable and fragmented musical monologue the depth of human need. It's a gorgeous song; a classic.

D.B. Rielly will surprise you. His blend of humor, musicality and subtle songwriting puts him on a path to be compared to folks like Lyle Lovett and Randy Newman. You're never entirely sure whether Rielly is being serious or joshing you until the song is done, but the music he crafts along the way is exceedingly pleasing to the ear, and sometimes that restless anticipation of where he'll go next is as much of the experience as the songs themselves. If he continues writing songs like the ones on Love Potions & Snake Oil Rielly should want for little for the rest of his career. Love Potions And Snake Oil is breathtaking, a Wildy's World Certified Desert Island Disc.

Learn more about D.B. Rielly at http://www.dbrielly.com/ or www.myspace.com/dbrielly.  Love Potions And Snake Oil is available both on CD and as a Download from CDBaby.com.  You can also pick up digital versions of the album from Amazon.com and iTunes.