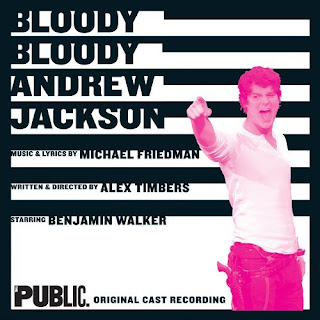 Those lucky enough to catchy the Public Theater performance of Bloody, Bloody Andrew Jackson that ran through June of this year has seen the future of Broadway musicals. The rest of the world gets a peek when the show begins previews for its Broadway run on September 20, 2010. The next day, Ghostlight Records will release the original cast recording. In the spirit of shows such as Rent and Spring Awakening, Bloody, Bloody Andrew Jackson brings a pure rock n roll feel to life on stage, as male lead Benjamin Walker electrifies in his Broadway musical debut. Written and directed by Alex Timbers with music & lyrics by Michael Friedman, Bloody, Bloody Andrew Jackson has received a slew of shining reviews from New York press and looks to be the hot show for the 2010-2011 Broadway season. The soundtrack, produced by Kurt Deutsch and Dean Sharenow may be one of the hottest cast recordings to come out of the Great White Way since Wicked.

Bloody, Bloody Andrew Jackson opens with "Populism Yea Yea", a thrilling punk/pop diatribe against the mindless group psychology that seems to come over people in the political process. While clearly aimed at the story of Jackson and the "early 19th century", the lines between then and now are almost tangible to the listener. "I'm Not That Guy" is a political outsider's stump speech where Jackson lays out the elite establishment as the antithesis of what America needs and then offering himself as the alternative. The song features a great melody and a memorable chorus. Benjamin Walker is in the throes of rock star bravado here as a sort of Norbert Leo Butz on steroids. "Illness As Metaphor" explores self-abuse as a means to feel better. The song postulates on Jackson and his wife's use of self- or co-inflicted pain as a means of gratification. The self-destructive nature of the song once again may be drawn as a parallel to today's world where the political process essentially allows anything to get where you want to be (as long as you cover it up or apologize later).

"I'm So That Guy" gives an apt picture of the dual nature of political opinions and the phenomenon of the "flip-flop" in the ends/means argument of getting elected. Walker also brings out Jackson's violent, aggressive nature in highly emotive fashion. "Ten Little Indians" may well be a humorous aside based in Jackson's documented hatred of Native Americans as sung by the exquisitely voiced Maria Elena Ramirez as Jackson's wife Rachel, but it doesn't work well out of context with the show. As happens sometimes with cast recordings it would be a noted omission if left off, but likely needs a bit more context than is offered here. Political backroom deals and the elite's contempt for the common man are the concurrent themes of "The Corrupt Bargain", as told by a female Greek chorus with vocal cameos from the political players themselves. The song is full of cutting humor and blistering vocal harmonies. Don't be surprised if this is the song used for events like the TONYs or the Macy's Thanksgiving Day Parade.

"Rock Star" is a big-time, catchy rock n roll tune that shows Jackson's inflated opinion of himself on the grandest scale with a melody and arrangement that are absolutely virulent. This is the song that will be running through your head for days after you've seen the show or even just listened to the soundtrack. "The Great Compromise" is Rachel's soliloquy; a bitter monologue about continually giving ground to her husband's choices. The song is angry and precipitously short, foretelling what is to come. "Public Life" finds Jackson examining his place in the public eye in the wake of his wife's death. Ironically, as a final devotion he dedicates his life to serving the public; essentially her last complaint. Altruism is the word of the day, although it will soon become clear that Jackson's sense of altruism can't be separated from his warrior mentality.

"Crisis Averted" features Jackson on the stump and the reaction to his message. Friedman and Timbers show people's ability to justify away almost any bit of barbarism in the political process as a sort of self-serving quid pro quo, while also suggesting a sheepish adherence to political message over substance. Andrew Jackson's personal imperialism shines through on "The Saddest Song", with Jackson perhaps losing some of the boundaries between himself and the country. Jackson's need to fight and scratch and claw hasn't disappeared just because he's achieved what might have been nominally his dream. "Second Nature" digs into this concept as more of an American ideal; the sort spelled out in policies such as manifest destiny. The message is essentially "if it's there, we'll take it". The song is not one of regret but of sociological realization. It's a quiet introspective moment of justification as Jackson sets his personal philosophy to rights with the world around him. The cast recording closes with "The Hunters Of Kentucky", a rock n roll recast of parts of Samuel Woodworth's poem about The Battle Of New Orleans which later became a campaign song for Jackson. The song was part historical recounting and part propaganda and begot popular misconceptions about the facts surrounding the fight. It's a great bit of irony and a fabulous closing number, underscoring Jackson's great accomplishments while highlighting his tendency for self aggrandizement.

Bloody, Bloody Andrew Jackson features perhaps the most dynamic original rock n roll score to hit Broadway since Rent dawned on Broadway in 1996, and Benjamin Walker should see some serious TONY buzz next spring and seems destined be the next rising star in New York. You'll hear grumbling from the traditional Broadway crowd, but this is a show that will pull in the younger crowds in record numbers. Don't be surprised if the TONY buzz goes beyond Walker to the show itself, Alex Timbers, Michael Friedman and even album producers Kurt Deutsch and Dean Sharenow. This show is likely to be a monster, and the soundtrack is a must.

Expect wide availability from outlets traditional and digital.
Posted by Wildy at 5:10 AM