David Gergen - The Nearer It Was... The Farther It Became 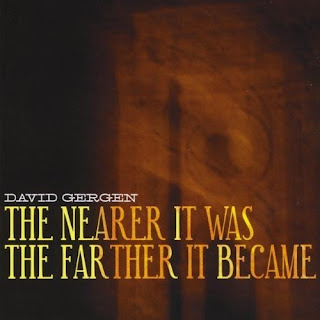 David Gergen - The Nearer It Was... The Farther It Became
2010, David Gergen

Singer/songwriter David Gergen's latest effort, The Nearer It Was... The Farther It Became can be likened to a rugged outing for a pitcher. He fights his way through without great stuff, gutting out a performance that shows some promise but is never quite enough to win the game. Solid Americana arrangements dot the landscape; and it should be noted that Gergen seems to have a talent for writing and arranging music that is pleasant but non-threatening. Vocally, Gergen struggles with both pitch and tone, sliding around notes at times like a toddler walking on ice. "Seven Miles To Sunset" shows a distinct melodic sense, but Gergen takes melancholia to the point of disaffection. "The Streets I'm Walkin'" is gentle Americana impressionism; observational songwriting with a melancholy flair. This is one of the more successful tracks on the album, and Gergen tightens up his breath control for a workable performance.

"Ore De Electro" is messy and eclectic, featuring an uneasy marriage between guitar and ambient synth. "Love Blues #11" mixes blues with space-age Electronica and slipshod vocals. The result is a sonic mess that's interesting but doesn't have the compositional clarity to hold your attention for long. Things pick up a bit on "Thru A Fairy's White Cloud". Gergen sounds a bit like Johnny Cash on downers here; a unique approach that is well framed here. "The Other Side Of The Sea" is a lost, mournful monologue. Gergen starts out with good intent, but the lack of affect here is more distracting than informative. Gergen closes with the incomplete "Your Letter", a response/monologue that is cut as short as the relationship it memorializes.

David Gergen shows some interesting signs of life on The Nearer It Was... The Farther It Became. This is certainly not a happy-go-lucky album, featuring the sort of emotional downward spiral that sometimes coalesces in the wake of a relationship. Gergen's vocal style works at times, but his tendency to sing around notes rather than hit them head on can become a distraction. The recording in general suffers from the lack of collaboration. A close listen shows an artist with much to say, but may need the creative tension of co-writers to bring the dark magnitude of Gergen's night more fully out into the open.

Learn more about David Gergen at www.myspace.com/davidgergen.  The Nearer It Was... The Farther It Became is available from Amazon.com as both a CD

.  The album is also available from iTunes.
Posted by Wildy at 5:00 AM