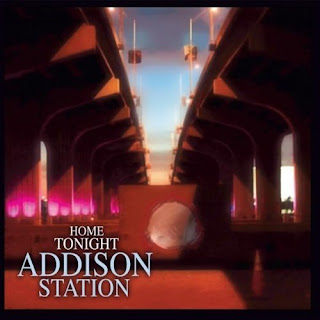 What started out as a studio project has taken on a life of it's own for Manchester, Connecticut's Addison Station. Vocalist Trent Gerbers and multi-instrumentalist Jeff Kenniston began touring as an acoustic duo, and released their debut album, Everyday Hero in 2009. While the duo enjoyed playing to crowds of all sizes and stripes, it soon became clear to them that a larger ensemble was needed to realize the full potential richness of their sound. Into the picture come Kyle Dunnack (percussion); R.C. Roberts (lead guitar) and Doug Parkinson (bass), and Addison Station as they currently exist was born. In June of 2010 Addison Station released their sophomore EP, Home Tonight, a collection of four pop/rock tunes that jump off the scale on catchiness factor.

Home Tonight opens with "Falling" a vibrant pop tune about love that carries a similar cadence and sound to Blues Traveler (without the harmonica). It's a song about falling in love that's incredibly catchy and buoyed by great vocal harmonies and a tight arrangement. "Run To You" has a similar dynamic and parallel motivations. It's a pure radio-ready offering with enough pizzazz to garner some attention from radio programmers but is ultimately formulaic. "Home Tonight" is a lightweight ballad written by someone who spends much of his life on the road about the inherent need to get home to the one you love and how life sometimes puts obstacles in the way. "Expiration Date" is catchy but extremely sophomoric lyrically. In contract to the other material presented here "Expiration Date" borders on embarrassing. "You Don't Have To Turn Away" helps Addison Station find redemption in a nuanced relationship song that keeps the big rock ballad sound but digs a bit deeper lyrically. This is a great selection to close the EP, and proof positive that "Expiration Date" is more of an anomaly than a carefully hidden trend.

Addison Station definitely has the knack for writing catchy tunes, and with one exception correlates them with competent to above average lyrics. The result is a highly radio-friendly sound with the potential to score Addison Station some legitimate pop hits over the years. Home Tonight is a solid effort that rises above the pop throng; enough so to be heard and appreciated on a wide scale.

Learn more about Addison Station at www.myspace.com/addisonstationmusic.  Home Tonight is available from Amazon.com as a CD

The album is also available digitally through iTunes.
Posted by Wildy at 6:48 AM