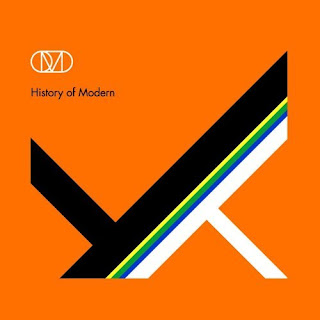 British rockers OMD (Orchestral Manoeuvres In The Dark) returns with the first new album in fourteen years on September 28, 2010. History Of Modern finds OMD getting back to their 1980’s routes, when along with Depeche Mode and Pet Shop Boys they helped define the sound of the decade. The influence of bands such as OMD is pervasive in an era where electronic music has simply become “pop”, but it’s very clear that OMD retains the vim and vigor that made them such a dynamic force in 1980’s pop music. It’s not out of bounds to say that History Modern might be among their best work to date.

History Of Modern opens with "New Babies: New Toys", bringing an influx of classic new wave synth pop sounds. This is highly danceable as is, and with the right remix should haunt the dance clubs of Europe and the US into the spring. The song examines the circular relationship between materialism and emptiness and the spiral it can incur. "If You Want It" bears the message that opportunity exists for all who would take a chance and step outside themselves. Heard on another level it could also be a love song of sorts. Andy McCluskey provides one of his best vocal performances on the album here. "History Of Modern (Part I)" is a catchy mellow pop tune built a singular keyboard riff. While not overly creative this is a solid pop tune that takes a positive view of the past from the perspective of where he stands today.

"History Of Modern (Part II)" plays devil's advocate to the perspective espoused in Part I, striving to forget the past for its lesser qualities. Part II is built around a keyboard riff that's really just a variation of the riff that drives Part I. OMD takes an unfortunate side trip on the muddled "Sometimes", co-opting the chorus of the spiritual Motherless Child as its own. The melody itself is pleasant, but the song comes across as a composite constrained by this calculated mash-up of original and borrowed tunes. "New Holy Ground" is a bit repetitive but pretty, emphasizing courage to remake yourself in the wake of tragedy or loss. The imagery here is a bit more refined than you might here in your typical pop ballad. OMD balances this off with the trite but entertaining "The Future", which is built on a mellow dance groove remarkably similar to the one that drives Golden Earring's "Twilight Zone".

Faith gets a good working over in "Sister Marie Says", a cynical song that questions what the narrator would do if all the things he learned in parochial school came true. The most intriguing part of this song is that beneath the irony and cynicism seems to be a desire, or at least a wish for those things to be true, as McCluskey seems to leave the door open even while putting these ideas in their place. OMD goes for pure sensuality in the sexually charged light dance groove "Pulse". This one's pure ear candy, and well done at that. OMD fills in with two or three middle of the road tunes before closing with the fiery "Save Me", featuring special guest vocalist Aretha Franklin. Franklin's vocal performance is a true highlight, and this danceable tune seems likely to garner OMD some serious attention going forward.

OMD proves they still have it on History Of Modern. Synth pop perhaps doesn't carry cultural weight it did in OMD's heyday, but in an era of over-complicated pop music built on complexities of sound it is refreshing to hear a band getting back to the pop basics of melody and simplicity. OMD was on the cutting edge in their heyday. They're there once again as the pendulum swings back the other way.

You can learn more about OMD at http://www.omd.uk.com/ or www.myspace.com/officialomdmyspace.  History Of Modern drops in the US on September 28, 2010.  You can pre-order the CD

through Amazon.com.  Digital pre-orders are available from iTunes.  A vinyl edition will be released on October 5, 2010.