The Rakehells - Please Yourself: Or The Devil Himself 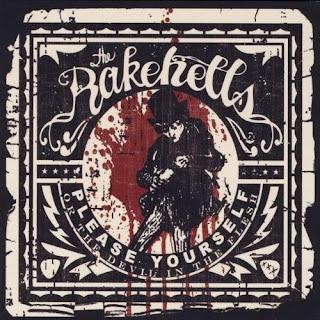 The Rakehells - Please Yourself: Or The Devil Himself
2010, Rock Park Records

With members from both sides of the Atlantic, The Rakehells have developed a special relationship built on familiar building blocks: The Sex Pistols, The Rolling Stones, The Clash, The Ramones and The Stooges. Bringing their lascivious musical presence to New York's club circuit over the past five years, The Rakehells decided it was time to document their sound. With the help of producer Mitchell Rackin, The Rakehells recorded Please Yourself: Or The Devil Himself, live in Studio. The album is set for release on September 21, 2010 and captures the frenetic live energy that has made the band a crowd favorite.

The Rakehells drive their points home with fifteen sub-three minute compositions in a performance that smack familiar to the frenetic sound of The Ramones but with the deliberate chutzpah of the The Rolling Stones. "Ready Fire Aim" is the vibrant lead track that suggests the impulsive nature that runs throughout the album. "Souls For Sale" is a driven little rocker built around an infectious guitar riff that starts heavy and never lets up with rapid-fire lyrics and an arrangement that's quick, dirty and to the point. "Mode Of The Mountain" is a straight-ahead barrel ride of the song; the Rakehells offer no quarter in the pure punk diatribe. "Charles Malay" is pure punk energy but retails a serious pop song aesthetic that will have it playing in your mind well after the CD has stopped spinning.

"Meat On A Stick" maintains the breakneck pace before The Rakehells lapse into the Le Singe, sounding more than a bit like the Talking Heads. "Capital" keeps the same energy but in a more Ramones-inspired rampage. Things get a bit hairy thereafter, with The Rakehells flying further and further from the melodic core with songs such as "Sexton Blake", "Prophets & Profiteers" and the Rolling Stones-styled "Cool Your Boots". The Rakehells close with "Poison Pen Letter", clocking in at nearly four minutes; easily the longest track on the album. Imagine a sort of British Invasion/grunge mix and you'll have an idea where The Rakehells are coming from here. It's an intriguing offering, perhaps a sign of where The Rakehells might head when they eventually tire of the two-minute song form. A brief untitled track follows that plays with sampling and overdubs, but appears to be more afterthought than anything else.

The Rakehells certainly have the energy and vitality to make a live show worthwhile. On Please Yourself: Or The Devil Himself, The Rakehells show a propensity for straight-ahead punk madness with high energy and indifference to public safety. It's a style that will play well in New York and London and to select pockets of music fans around the world. There are hints of a deeper musicality and ambitiousness that may allow room for growth into a more balance songwriting style that will sustain The Rakehells long past the vigor of their youth. For now they're a lot of fun, with great potential on the horizon.

Learn more about The Rakehells at http://www.therakehellsnyc.com/ or www.myspace.com/therakehells. Please Yourself: Or The Devil Himself drops on September 21, 2010.  You can pre-order the digital version from Amazon.com.

Labels: The Clash, The Rakehells, The Rolling Stones, The Sex Pistols, The Stooges