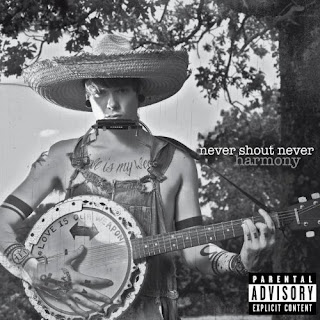 Harmony opens with the title track, a highly simplistic and redundant folk/rock track that is likely to have some commercial appeal. The acoustic arrangement here is appealing, but the repetitive nature of the song is likely to grate on a few nerves. "This Sh!t Getz Old" is a highly infectious bit of acoustic pop music that is so catchy you'll overlook the banal lyrical constructs it contains. "Cheatercheaterbestfriendeater" is a calling of accounts for a digital age; a somewhat clinical yet emotionally mature review of a shallow ending to a shallow relationship. "Lovesick" may be the emotional epilogue to "Cheatercheaterbestfriendeater", written with a flair that suggests someone's been listening to 1960's cabaret music rather than the current crop of pop songs. It's a well-constructed song with a great melody and a catchy but quiet feel.

"Piggy Bank" sings the praises of being with someone who appreciates the simple things, particularly when the simple things are all you can afford. It's a highly catchy tune that will have your toes tapping even if the rhyming scheme is occasionally on the far side of awkward. "First Dance" features some impressive vocal harmonies and has the sort of pacing and feel that leads to chart success. Rapid-fire lyrics in the verses resolve into a chorus you'll be humming in your sleep. "Trampoline" is about the building tension of a fledgling relationship and the stops and starts brought on by a prior bad experience. The arrangement is highly inventive and illustrative of the way such relationships might run; a surprisingly subtle bit of song craft. "Sweet Perfection" is a fun little country-style romp that attempts to convince an intended paramour how wonderful things might be. It's a charming tune with real life and is perhaps the most likely track on the album to be on continuous repeat on your MP3 player. On "Sellout" Never Shout Never take themselves and the music industry to task for the tendency to place image over music and creation; the sort of song a major label wouldn't have allowed even five/ten years ago. In the age of "independent" labels established with the financial support of the majors it's only a little less surprising. The song works, but does have a whiny quality to it that will turn some off.

Never Shout Never hit the big time and make a sudden left turn musically, sticking to mostly acoustic folk/rock songs on Harmony. The result is generally very good and occasionally stunning. Never Shout Never does occasionally suffer an awkward moment in their lyrics, but bulls their way through like it doesn't matter. The music tends to be so catchy and/or memorable they are probably right. Never Shout Never, in essence, takes several giant leaps forward artistically with Harmony, overcoming the sort of sophomore doldrums that afflict many bands with blunt acoustic force. The band has its idiosyncrasies, but there's something in the chemistry of Never Shout Never that makes you want to overlook the small blemishes; like that one friend in every group that's a little off-kilter but no one has a bad word to say about. Never Shout Never will sneak up on you and have you hooked on their melodies before you know what hit you.

Learn more about Never Shout Never at http://www.nevershoutnever.com/ or www.myspace.com/nevershoutnever.  Harmony is available from Amazon.com as a Deluxe CD, Standard CD

iTunes has the album in both Explicit and Clean versions.
Posted by Wildy at 5:10 AM