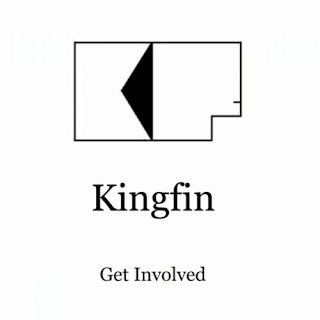 UK rockers Kingfin draw their influences from bands such as The Clash, Nirvana and The Ramones, but with healthy doses of Radiohead and Pink Floyd thrown in as well. The band, who take their name from a bad guy in the game Super Mario Galaxy is starting to garner global attention, with radio placements in Canada, the US and back at home based on their debut EP, Get Involved.

Get Involved opens with "Hollywould Smile", a diatribe against television shopping and the ease at which such TV networks talk people out of their money. There's a modicum of anger here and the arrangement is suggestive of punk origins but more refined. "Dirty Little Secret" takes to task someone for their role in infidelity as the third wheel. It's a wakeup call delivered over a simple arrangement heavy on drums and bass with guitar providing angry accents. "Living Hell" is a slinky, blues-influenced rocker that's a lot of fun to listen to. This song probably works best on stage, but it will get your toes tapping no matter the setting. Get Involved closes with "Sweet Sixteen", an angry monologue about a teen girl with an over-sized sense of entitlement.

Kingfin seems to have some of the punk anger but little of the lash. The four songs offered on Get Involved are enjoyable on their face, but the aural treat becomes plain with repeated exposure. Some of this is certainly presentation, and it seems likely that these songs would fare better on stage with the flow of live energy than in the studio. Get Involved is enough to get you in the door as a listener. What Kingfin does next will tell whether listeners stick around.

Learn more about Kingfin at www.myspace.com/kingfin01.  Get Involved is available digitally from Amazon.com