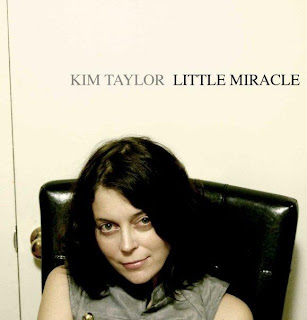 Cincinnati-based singer/songwriter Kim Taylor returned recently with her fourth album, Little Miracle. A stark, stripped down set of folk rock songs, Little Miracle represents Taylor’s most powerful songwriting to date. The album was written and recorded in The Maid’s Room in New York City (a favorite place of Rufus Wainwright) over several days, and has the urgent emotional feel that only that sort of milieu can bring.

Taylor opens with the title track; "Little Miracle" is repetitive and catchy, about as bubblegum as Taylor will allow herself to get. The song has mild commercial appeal but isn't groundbreaking. "Lost And Found" sticks with the repetitive style but does so in a pretty melody and shows off Taylor's unusual voice. "American Child" is intriguing, exploring the dreams of parents affected by war and difficult times. The song might also be interpreted through the eyes of an immigrant family, a theme that's not lost on Taylor later in the album. Taylor delves into the depths of loss and grief on "Anchor Down", casting herself into a sea of emotion for a stark and moving vignette.

"Do You Ever Feel Lonely" intertwines a catchy melody and arrangement with a melancholy mood; an interesting juxtaposition that sounds like something that might come out of a jam session between Sheryl Crow and Bonnie Raitt. Fatalism rules the day in "If I Am Wrong"; where effort is ultimate object but the outcome doesn't seem to matter. Taylor's shining moment comes on "Fruit Of My Labor", a brilliant look at life and dreams through the eyes of a migrant worker. Taylor shows distinct depth as a songwriter here; bring the subject alive in the vibrant color of her words and her presence as a performer. Little Miracle closes with a low key but powerful love song in "Sharp Cutting Wings (Song To A Poet)", showing off more of the impressive songwriting depth that Taylor kept somehow muted through much of the album.

Little Miracle leaves the impression of an artist who is getting better as she continues to write. Taylor starts out on solid footing, but the final two tracks on Little Miracle are the sort of songs songwriters aspire to a handful of times in their careers, much less consecutively on one album. You won't be likely to leave Little Miracle behind anytime soon, but when you do it will be in open anticipation of whatever Taylor graces us with next.

Learn more about Kim Taylor at http://www.kim-taylor.net/ or on Facebook.  Little Miracle is available on CD from Amazon.com.  Digitial copies are available from iTunes.