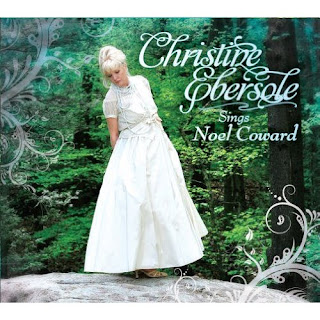 Television. Movies. The Stage. Christine Ebersole seems to make her mark wherever she goes. While Ebersole got her start on the TV soap Opera Ryan's Hope, she's done time as a Saturday Night Live cast member, been in several major motion pictures and guest-starred on such television shows Will & Grace, Murphy Brown, The Nanny, Boston Legal and Samantha Who. Ebersole's biggest impact has been on stage, however. The two-time Tony Award winner for Best Leading Actress In A Musical (42nd Street - 2001 revival; Grey Gardens). Ebersole recently paid tribute to legendary composer Noel Coward with the release of Christine Ebersole Sings Noel Coward.

Ebersole opens with "Someday I'll Find You", a pining love song steep in melancholy and hope. It's an intriguing starting point, as Ebersole offers a measured performance that's both full of emotion but also detached. "Any Little Fish/It's Only You" is a lilting love song, and Ebersole performs it in classic Broadway style. It's a wonderful performance full of heart and character. Be sure to check out the duet with Howard McGillin on "A Room With A View"; a stellar performance that connects with listeners on several levels, not the least of which is the apparent chemistry between the performers. "Chase Me Charlie" is a charmingly whimsical number; Ebersole injects energy and joy into the number in a vibrant performance you won't soon forget.

Ebersole sails through "Matelot/Come The Wild, Wild Weather" and "I'll Follow My Secret Heart" before interpreting "World Weary" in a brilliant gust of melancholy. It's a brilliant performance that deserves attention. "Mad About The Boy" finds Ebersole in emotional turmoil of falling in love with a movie star, bringing the competing emotions of love, uncertainty and fear to light in shifting and palpable veins. "The Dream Is Over" is a sparking song of heartbreak that simply reinforces Ebersole's presence and ability to emote in believable fashion through song. Ebersole bows with 'I'll See You Again", a bittersweet waltz that finds Ebersole gliding and soaring across a melody line that sounds like it was written with her in mind.