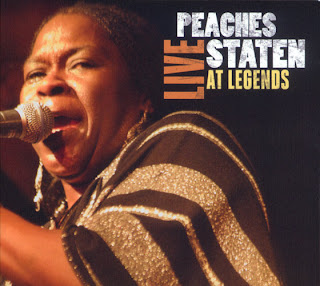 Peaches Staten is a powerhouse blues vocalist and zydeco washboard player who's also dabbled in Brazilian music and most anything else she's come in contact with. A versatile singer with a worldly sense about her, Staten takes command of a stage the second she steps on it. On her album Live At Legends, released September 21, 2010, Staten rocks the mic for nine songs recorded at Buddy Guy's Legends (the last live show recorded before its closing). With a backing band of Mike Wheeler (bass); Larry Williams (guitar); Brian James (keys) and Cleo Cole (drums), it isn't so much a question of whether Staten will bring down the roof, but when.

Live At Legends opens with "Long Distance Call", a dynamic R&B number about missing someone far away. Staten fills the song with an angst and longing that's palpable while maintaining a toughness that's surprising. Larry Williams fills in with some raucous guitar solos while Mike Wheeler completes the percussion with complex rhythms in the bass line. Staten slows things down a bit with "Don't Rush Me", a mellow pop/R&B tune that will remind many of Tina Turner. That's really only fair to say if you acknowledge that Staten's voice is bigger and more complete than Turner's; Staten has that same rough edge to her voice, but there's a lot more depth to her sound. Staten introduces "Must Be Love" as a song Chico Banks wrote for Mavis Staples, and proceeds to launch into the most inspired version of the song since Staples herself gave it voice.

"Gotta Find My Man" is a Zydeco number and features "Swississippi" Chris Harper on harmonica. Staten shows her chops on the washboard while belting out a vocal line that will send chills down your spine. Staten's band is in top form here as well, bending and flexing musically as if one creature rather than four (five with Harper) distinct personalities. Not to sell short the comparisons, Staten tackles Tina Turner's "I Know You Love Me", once again matching, at the very least, the original and perhaps even surpassing Turner with a rendition as hot as an oven rack. Chris Harper throws off harmonica licks like solar flares and Mike Wheeler wreaks havoc with his bass.

Staten launches into "Rather Go Blind", burning through every line of the torch song with a deep intensity and storyteller's touch. "Rather Go Blind" is the bravura performance of the album, with Staten holding court and recounting the depths of heartache in a conversational singing style that's absolutely brilliant. Staten adds an exclamation point onto this performance with the Moon Martin penned "Bad Case Of Loving You". Originally made famous by Robert Palmer, "Bad Case Of Loving You" is remade in Staten's hands into an instant blues classic. A bit of Texas blues rears its head in the slinky "Hole In The Wall", with a call-and-response chorus that highlights Staten's rough-and-tumble vocal style. The energy is sky high here, and carries over into the closing number, a cover of Alberta Adams' "Keep On Keepin' On". Brian James goes to town on the piano, and Harper acts as aural tease in contrast to Staten's voice, but Peaches Staten leaves no doubt about who owns the stage.

Peaches Staten has a solid following outside of the United States. It's hard to imagine how she has thus far failed to catch on here given her dynamic stage presence. If Live At Legends is any indication whatsoever, crowds of people will show up as long as Staten continues to perform. In an era where ProTools can airbrush every vocal blemish out of existence, the presence of vocalists like Staten remind us of where we came from; and why the style of music she purveys perseveres in spite of the social mores of the moment. Live At Legends is essential listening, particularly if you make music yourself. Staten is a performer in every sense of the word.

Learn more about Peaches Staten at www.myspace.com/peachesstaten.  Live At Legends drops September 21, 2010.  You can pre-order the CD from Amazon.com

.  Expect wide availability after the release date.
Posted by Wildy at 5:10 AM

I am loving your review of Peaches Live At Legends. Truely from your words, you enjoyed the cd. Thank you for your support.