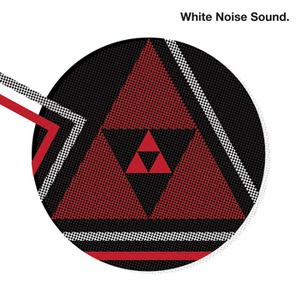 Welsh rockers White Noise Sound launch their wall of sound at an unsuspecting world with their self-titled debut album on September 21, 2010. With the help of Pete Kember (Spacemen 3, Spectrum, E.A.R.) and Cian Ciaran (Super Furry Animals), White Noise Sound have realized a sound that calls on their forebears, acts such as Brian Eno, The Velvet Underground and even Syd Barrett-era Pink Floyd. Awash with synthesized sounds and feedback, White Noise Sound turn their name into fashion, fashion into art, and occasionally even cull something like a melody out of their sonic playground.

White Noise Sound is a droning electronic fair crossed with occasional doses of rock guitar. "Sunset" opens, the most commercial and intermingled track on the album. Unfortunately the marriage of sounds comes across as bland rather than intriguing. "It Is There For You" is more ambience than song with a spoken word vocal and minimalist arrangement. "There Is No Tomorrow" shows a bit more depth; layering electronic sounds with horns. It is the most extensive attempt at arrangement offered up by White Noise Sound and the highlight of the album. Unfortunately White Noise Sound seems to slowly fade away thereafter, as if the one attempt at real integration in the songwriting process sapped the creative flow from the band.

White Noise Sound is more performance art than songwriting, mixing and matching sounds in a primarily electro environment while trying to appeal to a wider demographic. This approach appears to have been backfired, as White Noise Sound fails to really generate much business with their self-titled debut.