One Step Away - For The Broken 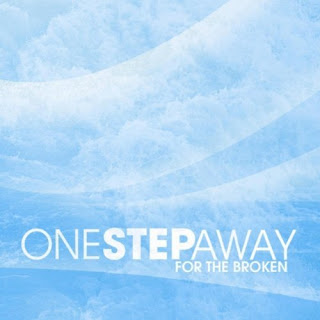 One Step Away first began their inertial pull in 2006 when friends Terrence Healy (guitar) and Mike Nuzzolo (bass) began jamming together. It wasn't long before Adam Carrington brought his classically trained voice into the mix, helping to define the sound that would become associated with One Step Away. A self-titled EP later and drummer Ben Trudeau joined the fray. The path since then has been an upward one, with larger and larger gigs covering a bigger geographic area. One Step Away has now played coast to coast and won several regional and national competitions for songwriting and performance. In early 2010 One Step Away dove into the studio with producers Dan Malsch and Alec Henninger of Soundmine Recording Studio (Framing Hanley, Tantric). The resulting album, For The Broken, has One Step Away poised on the brink of the big time.

For The Broken opens with "Here We Go", a catchy active rock tune with big hooks and a memorable chorus. It's the sort of catchy power ballad/love song you simply can't get out of your head, and Adam Carrington's classical vocal training is not wasted here. "Need You" is in much the same vein, although perhaps quite so catchy as "Here We Go". "Next To You" is an over-produced and lovelorn ballad that has the potential to be a big pop hit. All of the elements are here for top radio success, but the song has a contrived feel that is absent elsewhere on the album. "Riptide" is a song of longing; of searching for love amidst rough currents. The narrator here simply can't let go of the past; continually getting sucked back into his memories. "Riptide" has a great melody and a fresh feel in spite of the thorough production values.

"Hook Line And Sinker" finds Carrington at his best in a big dynamic rocker with real pop punch. The song is infused by the joy and optimism of love, and One Step Away spices up a simple arrangement with interesting instrumental textures and subtexts in the arrangement. The potential for "Hook Line And Sinker" is huge, as it combines One Step Away's intense pop musicality with an open, honest songwriting approach that resonates. The band falls into a bit of a lull for a few songs but breaks out nicely with "In This Moment", which straddles the line between big-time pop/rock and adult alternative niches. "You Said" is a song of heartbreak, mired in the perceived lost opportunities of the dumped. It's an admonition made from a position of weakness that's radio ready. One Step Away closes with "All The Little Things", documenting the little moments that we hold onto when a relationship fails.

One Step Away made a choice between an album of love songs and a breakup album by not choosing, instead inscribing the relationship arc in song on For The Broken. The result is an album full of songs you'll find yourself humming/singing well after the disc has stopped spinning. One Step Away dabble on the edges of over-production in seeking for the perfect pop/rock sound, but the material is so catchy and fun to listen to that this effort is simply overkill. The album is a strong musical statement, and the songs will fare even better on stage than on For The Broken. One Step Away just may be.

Learn more about One Step Away at http://www.onestepawayband.com/ or www.myspace.com/1stepawayband.   For The Broken is available digitally through Amazon.com and iTunes.

Labels: One Step Away

Leaving an open ended first EP, The "for the broken" album, narrows down every aspect of their music. The production is great for the style, but that's all it is: "style." Eleven of the same songs. Unfortunately, even the new version of "In This Moment," makes a poppy, techno-ed out version of the old rocker.
Try deviating from 120 bpms guys, and good luck next time.