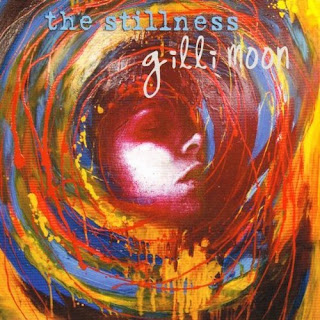 Gilli Moon started down the Indie Path ten years ago, when few knew what that meant. The Italian Born, Australian-raised Los Angeles resident started her own label, Warrior Girl Music, and has made a career not only of her own music but by producing and releasing the music of other prominent young artists. Along the way, Moon has released a number of highly-lauded albums on her own. 2010 sees Moon return with her sixth, The Stillness, a highly personal and melodic set of tunes about learning to live with yourself and the world around you.

The Stillness opens with "A Conversation With Me", a son of self-assurance and perspective. The song reflects a realization that we have all the tools within ourselves to become what we want to be. Moon's voice is lovely, blending textures and colors with tremendous tone and a soulful feel. "Be" is an idealist pop love song about giving yourself completely. Moon's performance here is splendid, but the spoken word/rap added messes with the song's mojo and sounds horribly contrived. "Outside In" explores intertwining your life with another in trite terms and has an almost whiney feel that seems to run counter to its message.

Moon takes on an R&B vibe on "The Stillness", a song of distinctive melancholy that revolves around a highly repetitive chorus. "Moon" goes for an ethereal air, recalling artists such as Enya or Maryen Cairns. Things get a bit surreal on "Days In November", a song of remembrance built in layered electronic instrumentation. While expecting some emotional content, the listener is greeted with a flat, low-energy recitation that is hard to square with the lyrics. "Moon" gets it right on "Cling On", stripping the arrangement down to herself and her guitar in one of the best performances on the album. Moon's style here is unaffected; pure communication in song via a simple and pretty melody line.

"Secret Of My Heart" shows a balladeer's touch in a song seeking truth and love. This sounds like the sort of song Celine Dion likes to claim for her own. "Silent Prophet" seeks the counsel of that still quiet voice that dwells in each of us, whatever you may choose to call it. This quiet moment of introspection opens into the final tune "I Can Touch The Sun". Moon closes on the same positive plane she opened with, emphasizing the melody line and vocal harmonies amidst scant instrumentation.

Gilli Moon has a very enjoyable voice what works best in open arrangements. When she sticks to this approach The Stillness shines. Moon appears to have embraced the post-genre ethic however, and some of the musical sidebars she takes here are less than optimal for her voice. On the whole, The Stillness is worth spending some time on. There may be an occasional song to skip, but her voice alone is worth the trip.

Learn more about Gilli Moon at http://www.warriorgirlmusic.com/ or www.myspace.com/gillimoon. The Stillness is available on CD from Warrior Girl Music.  Amazon.com has the album as both a CD and

Digital copies are available through iTunes.
Posted by Wildy at 6:43 AM