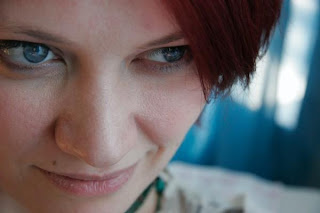 Minnesota native Hannah Fairchild re-settled in Brooklyn in 2005 with the intent of becoming an actor. Highly artistic with a strong independent streak, Fairchild didn’t take to the bridle of the actor. Fairchild spent her 2006 tax return on a guitar and set out to remake herself as an artist. Four short years later, Fairchild released her debut album, Paper Kingdoms. Recorded entirely independently in Fairchild’s apartment, Paper Kingdoms dances a highly personal path between fantasy and reality as it explores the difficulty of being a girl and growing up in a complicated world.

Paper Kingdoms opens with "Pin Up", a song of consolation to a friend who has gone through a breakup. Cutting and powerfully empathic, Fairchild avoids the usual syrup and sap that such songs seems to inspire. If Paul Simon had a love child with Tori Amos, she might sound a bit like Fairchild here. "All Eyes On Me" is a song of growing self-assurance and power that might reflect recovery from a loss or just a late bloomer coming out of her shell. It's an amazing bit of songwriting that shows a bit of Ani DiFranco influence. "Before The Cold Air Hits Us" documents the angst and gratification of a dysfunctional relationship in chillingly honest terms, focusing on the comfort and familiarity of the situation for both parties. The title here references reality and the hope to dwell in the known a bit longer before reality hits.

"Poor Leander" shows further empathy, this time for a friend whose need to save others lures him into messy relationships again and again. The intriguing narrative recognizes this quality and also his need to seek out the narrator every time that things fall apart. Fairchild gets in-depth with "Cassie At The End Of Things", an intriguingly positive look at falling down. The song digs past complacence to the elements of loss. Fairchild is in her best voice here, and the performance is nothing short of electric. "Nicollet" is a brilliant tune about a broken soul trying to be the beauty she seeks. Stark and hair-raisingly beautiful, the narrator is full of defiance and self-respect in spite of all she's been through. The last two songs on Paper Kingdoms appear to be cut from different musical cloth. On the rest of the album Fairchild has shown an ability to drill down on her subject and tell lyrically dense but concise stories in song. On "Lady Of The Court" and "Long Since Gone" show Fairchild as a more rambling lyricist. One might guess that these two are earlier songs of Fairchild's included here to fill out space. Both show promise but don't have the focus found on the rest of Paper Kingdoms.

Hannah Fairchild has a voice that grabs your attention and holds it, a gorgeous and edgy alto that's as unsettling as it is entrancing. Writing with a ferocious honesty on Paper Kingdoms, Fairchild bears her soul while maintaining a charming yet firm sense of control. Paper Kingdoms is one of the most strikingly honest and beautiful creations to cross this desk in 2010, even accounting for the final two tracks. Don't deprive yourself of the experience that is Hannah Fairchild.

Learn more about Hannah Fairchild at http://www.hannah-fairchild.com/ or www.myspace.com/hannahintheory.  Paper Kingdoms is available digitally from iTunes.
Posted by Wildy at 6:58 AM