The Lions - New Rise Of The Footsoldier 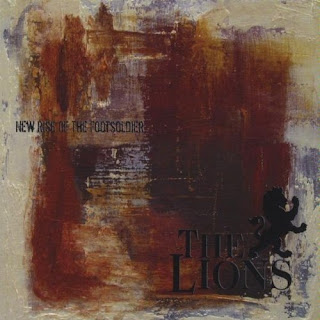 The Lions - New Rise Of The Footsoldier
2010, The Lions

Calgary rockers The Lions return with their sophomore album, New Rise Of The Footsoldier, the follow-up to 2008’s Sounds Familiar. Keeping the 1960’s vibe of their first effort, The Lions have updated their sound to blend in elements of grunge and alternative rock. The result is an intriguing step forward for the band that might still be a work in process but looks (and sounds) quite promising.

New Rise Of The Footsoldier opens with the ethereal instrumental "Ghost Dancer", an ambient mood setter in the style of Pink Floyd. "No Other Way" is more of a straight-ahead rocker; catchy with an urgent feel, combining a 1960's sound with the energy and feel of The Tragically Hip. The Lions dip back into mood music for "Incalescence" before falling into the restless energy of "Roam", a dark diatribe from a man who simply cannot settle down. "New Rise Of The Footsoldier" is a mid-tempo song that's nonetheless driven by an almost refined savagery. Rapid fire lyrics give the song an almost hip-hop feel while maintaining the dark rock-n-roll sound that seems to fill the album.

The Lions take on a bluesy rock style in "The Jam" before launching into the "You're A Whiner!” a nearly seven minute long tune that turns monotonous in the end. There's decent energy particularly in the low end of the arrangement, but the song just goes on too long without any significant dynamic variation. "Invincible" takes on a grunge mystique but with some pop aesthetic worked into the mix. It's the most intriguing song on the album, and is most representative of the transformation The Lions have undergone on New Rise Of The Footsoldier. The Lions wrap things up with "Remember", a somewhat mellower track about moving on into the future rather than living in the past.

The Lions have brought a heavier, darker feel to New Rise Of The Footsoldier. The same melodic tendencies the band has shown in the past are there, but the intensity and melancholy have trebled. Even sinking into such depths, there is generally very solid energy throughout the album. New Rise Of The Footsoldier explores alternative rock and hints of grunge shrouded in the depths of human misfortune but with eyes clear and strong upon a brighter day ahead.

Learn more about The Lions at http://www.thelions.ca/, which will redirect you to their MySpace page.  New Rise Of The Footsoldier is available digitally through Amazon.com