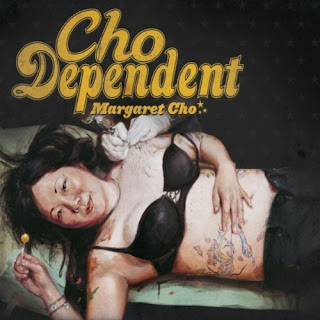 For many years Margaret Cho has been known as the potty-mouthed comedienne who has done more to tear down Asian-American stereotypes than anyone since George Takei. Cho's comedic act has always brimmed with language that would make George Carlin blush, but in the process she has shown an insightful eye for comedic detail that cannot be denied. Cho began bringing that insight, humor, and yes, language to song a few years ago, incorporating more and more comedic songs into her act. Cho recently documented her efforts with the release of Cho Dependent, a collection of fourteen songs based in serious music and the comedic whimsy of Margaret Cho and several of her musical friends. Guests include Tegan & Sara, Ani DiFranco, Ben Lee, Tommy Chong, Garrison Starr and Fiona Apple (among others).

Margaret Cho is incredibly smart, and she approached Cho Dependent with an eye to keep the music viable; a serious effort. In this she mostly succeeds on Cho Dependent. As for her lyrics/humor; it's really a matter of whether you like Cho coming in. If you like Cho's comedy then you'll like the album. If you don't, then the album will be a waste of your time. Cho opens with "Intervention", featuring Tegan & Sara. The song is an intervention in progress with Cho playing the one in need. Things go badly as interventions often do until something gets broken. The humor here is baseline and predictable, but the song is decent. "Calling In Stoned" features Ben Lee and Tommy Chong (as himself). It's one of the more amusing tracks on the disc, featuring a phone message from Chong to Cheech about stopping over to Cho's house for supplies.

"Your D!ck", with Ben Lee is too crass and straight-forward to be funny, turning more into an exercise to see how many times Cho can repeat the word in one song. "Baby I'm With The Band" is at least a little more subtle; not really funny but at least entertaining. "Hey Big Dog" tells the story of an interloper from the perspective of a canine. It's actually a pretty neat bit of songwriting. Fiona Apple guests in a decidedly atypical performance. "I'm Sorry" is a wayward and posthumous apology for homicide to the victim, featuring Andrew Bird. Cho's premise here has potential, but the delivery is two straightforward to mine that potential. Ditto "Lice", which takes the humor out of the equation by going rate for the comic jugular.

"Enemies" (with Jon Brion) is an anti-breakup song from the perspective of a megalomaniac celebrity who won't be put off. It's an amusing effort, particularly with the "don't you know who I am" mentality, and is well-crafted musically. "Gimme Your Seed" fails the humor test and isn't exactly the sort of thing you'd expect to hear Garrison Starr sitting in on. It's the low point of the album (followed closely by the preceding track "Asian ADJacent". "Eat Sh!t & Die" is extremely crass and equally amusing; a breakup song that could be an anthem in the right crowd. "Captain Cameltoe" was highly disappointing; particularly consider that Cho had none other than Ani DiFranco sitting in. "My Puss" is an estrogen-laced diatribe against a neighbor that Cho recorded off the cuff with friends and became a YouTube sensation. The song is that it is; a bit too straight forward and repetitive in form to appeal on a musical level. Perhaps the best song on the disc is the hidden track, "Lesbian Escalation", which Cho co-wrote and recorded with Rachel Yamagata. You'll have to hang around for a few minutes after the last track to catch this one.

Margaret Cho has a formula that works for her in Comedy, and she has carried that formula over into her music. Cho Dependent works on several levels, but funny is often not one of them. Cho has crafted an album full of viable compositions, but lacks the subtlety to really bring the humor out of her songs. As always, Cho tackles her subjects head on hoping to surprise or even bully the laughs out of you. The physical aspect of her comedy routine assists in this process, as Cho can pull some masterful facial expressions out of her bag of tricks. That gimmick doesn't work with the music, particularly not on CD/MP3. Too often Cho goes for the lowest common denominator, which is a valid choice, but it will leave too many listeners out in the cold to get Cho Dependent recognized as the serious attempt at music that it is.

Learn more about Margaret Cho at http://www.margaretcho.com/ or www.myspace.com/margaretcho.  Cho Dependent is available from Amazon.com as a CD'

or Download.  You can also find the album on iTunes.