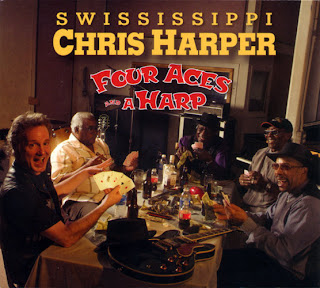 "Swississippi" Chris Harper is set to have a big day on September 21, 2010. Not only is it the official launch date of his new record label, Swississippi Records, but it's also the release date of his album Four Aces And A Harp. Based in Chicago, the Swiss-born Harper immersed himself in the blues several years back, and dreamed of starting a label that would promote the blues with sound quality and recording techniques that preserve the gritty feel of old school blues records. Early returns suggest success, starting with Four Aces And A Harp, which features Willie "Big Eyes" Smith (Drums), Bob Stroger (bass) and Jimmy Burns and John Primer sharing duties on guitar and lead vocals. All of this sets the stage for Chris Harper's dynamic style of Harmonica play, which draws on influences such as Little Walter Jacobs, Big Walter Horton and Sonny Boy Williamson II.

Four Aces And A Harp opens with "Hand Me Down My Cane". Harper plays the harmonica like its part of his skin, but Jimmy Burns steals the show with a vocal that will bring the house down. "Down In The Bottom" is about as classic sound as you can get, embracing the more urban overtones of the Chicago sound with John Primer's generous baritone taking the mic. From here Harper and his Four Aces take listeners on a history of US popular music with diversions into R&B, jazz and Be-Bop, but always coming back to their blues roots. "Sloppy Drunk" is a great tune, showing the transitional phase between blues and R&B. "Next Time You See Me" is a kiss off song that's guaranteed to get your toes tapping. Harper is in top form on Harmonica here, and the rest of the band never loses a step around him.

"What's Wrong" is a classic interactive vocal tune in the fashion practiced by many over the years but perhaps perfected by Louis Prima and Sam Butera. Harper is a vital part of the musical wallpaper here, filling in to complete the sound without trying to make himself the center of the song. Harper shows he can be a lead, however, on "Don't Get Around Much Anymore", which contains some of the most expressive harmonica playing you're likely to come across. Harper and his Aces give you the distinct feel of heartache it might take an Ark to escape on "Forty Days And Forty Nights", offering up a brilliant rendition of the classic. Never losing steam, Harper and the band settle into a steady pace for the rest of the album with songs such as "Evil Is Going On", "Long Distance Call", and the rollicking fun of "Digging My Potatoes" before closing with "Fattening Frogs For Snakes (It Took Me A Long Time)."

Chris Harper shows enough traditional blues sensibility to sit and play with the big boys of Chicago blues while retaining enough stylistic innovation to keep things fresh. The energy apparent on Four Aces And A Harp is not something you can fake; or buy. It comes from a love of the music, a mastery of the art, and a passion to keep the fire burning. In this both Swississippi Chris Harper and his fledgling label appear to succeed.

Learn more about Chris Harper at http://www.chrisharper.info/.  Four Aces And A Harp drops September 21, 2010.  You can pre-order the CD from Amazon.com

.  Expect wider availability in both traditional and digital formats after the release date.
Posted by Wildy at 5:00 AM