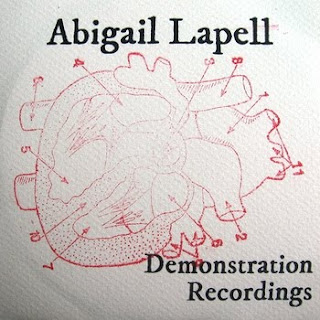 Abigail Lapell was born in Toronto but spent many years in Montreal before returning home in 2008. A fiery and highly personal performer, Lapell writes with a folk singer's storytelling acumen and the energy and commitment of a punk rocker. Having shared the stage with acts such as Veda Hille, Pony Up!, Rae Spoon and Lowest Of The Low, Lapell has shown an ability to win over crowds no matter how disparate their musical tastes. Along the way Lapell has also launched a monthly concert series featuring female performers (Catcall) and worked composing material for Toronto's Stranger Theatre. Lapell's latest project, Demonstration Recordings, is the first leg on the path to a full length album.

Demonstration Recordings opens with "Yellow Rose", a matter-of-fact yet mournful lamentation of a love life that never seems to work out quite right but is always guided by the best of intentions. Lapell works in a very low key approach here, relating the bumps and bruises of her heart in steady but heartfelt words in a low-key Americana arrangement. "Great Survivor" is musically and aesthetically pleasing with a darkly whimsical sense to the lyrics. It's as if Lapell is more riffing on a theme than trying to convey any particular message here, but the results are a pleasure to the ear. "Paper" is a song of longing; melancholy and plainspoken in approach. This low-key delivery doesn't work for every singer, but Lapell's voice projects a tragic beauty in velvety alto tones that reach right through you. "Twenty-Nine" looks at loss and see opportunity for the one who has walked away. The lack of emotion here is a bit disturbing, as if the narrator has suffered a dissociative break over the relationship's end. "Make Your Way Home" calls out to a love away from home, reminding him that home is always ready and waiting. Home here is both the place and the person who waits there. Lapell is fatalistic beyond the pale, delving deep into the melancholy of being apart without really showing the emotions you might expect. The dense pall of muted tragedy casts its glow once again.

Abigail Lapell is a distinctive voice, but as a singer and writer of songs her low key approach may not sit well with some. Nevertheless her gorgeous alto voice will overcome most of the naysayers. Lapell has shown an ability to fit in well with crowds ranging from rowdy punk/drunk to coffeehouse and seems able to appeal to all comers. Her Demonstration Recordings are just a start, but it’s the sort of start that launches careers.

Learn more about Abigail Lapell at http://www.abigaillapell.com/ or www.myspace.com/abigaillapell.  You can purchase Demonstration Recordings directly from Abigal Lapell through her webstore.  Digital copies are available on a name your own price basis.  Lapell will also send you a CD with handmade packaging for a minimum of payment of $10.00.  This CD is extremely limited, with Lapell producing only 200 copies.  These are likely to be big collector's items one day.
Posted by Wildy at 6:51 AM