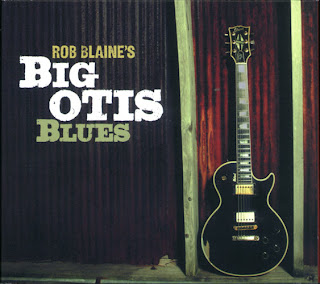 Rob Blaine plays the blues with a purpose. He's out to prove that the blues doesn't need to be said. A modern blues guitarist with all the chops in his arsenal, Blaine plays a brand of blues that's somewhere between southern rock n roll and the Texas blues of Stevie Ray Vaughan. Add in a bit of soul and funk and you've got the aural picture. Blaine releases Big Otis Blues on September 21, 2010. It's one of the debut releases from the fledgling Swississippi Records, and blurs a lot of boundaries between blues, soul, funk and rock n roll.

Big Otis Blues opens with "Not The Forgiving Kind", an upbeat and danceable kiss off tune that will get stuck in your grille and stay there for days. Blaine adds a soulful vocal to powerful rockin' blues and fills in some serious electric fire on his six-string. "Only Mine" is a soulful exposition of heartbreak, framed by outstanding piano and guitar interplay, filling in over one another like waves on the shoreline. Blaine puts his rock n roll shoes on for "Affection And Pain", throwing off deadly riffs around a roof-raising vocal performance. Blaine gets a blues-meets-gospel feel on the reverently secular "Same Old Blues". One of the most complete compositions on the album, "Same Old Blues" could find play in blues clubs in most any era.

The funk comes out on "Hour Glass Baby" before Blaine slides into the gentle guitar instrumental "Gone, Not Forgot". It's a nice turn, a peaceful aside in the middle of the album. Blaine picks right up where he left off somewhere, with the raucous admonition of "Trouble", "you should get a life of your own someday". Blaine blisters through the song with some impressive guitar solos and fills up the space in between with his big textured voice. "Must Be Nice" has Blaine bringing the high heat in a muscle-up blues/rock number that shakes the timbers and rattles the doors. Some of Blaine's most impressive guitar work on the album is found right here. "Don't Burn Down The Bridges" is another showpiece tune, allowing Blaine and his band to show off their chops in a rollicking bit of blues-based rock n roll. Big Otis Blues closes with an acoustic version of "Must Be Nice" that is compelling. Blaine's guitar work remains outstanding, but the stripped down arrangement gives more show space to his prodigious voice. It's the perfect aperitif to a plate full of blues.

Rob Blaine has hit feet planted firmly in the blues on Big Otis Blues even as he ventures into rock n roll to varying degrees. Big Otis Blues is an impressive introduction to a dynamic guitarist who also happens to have a voice people would stop on the street to listen to. Blaine is the complete package, and Big Otis Blues is a portent of things to come.

Learn more about Rob Blaine at http://www.bigotisblues.com/ or www.myspace.com/bigrobblaine.  Big Otis Blues drops September 21, 2010.  Pre-orders of the CD are available through Amazon.com