The Hippocrites - The Goodbye Waltz 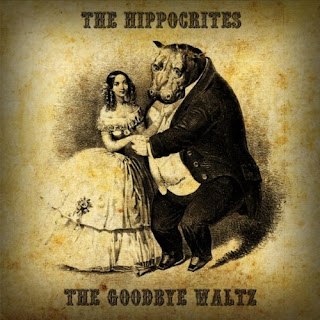 The last time we heard from The Hippocrites they were based in New Haven, Connecticut and were shopping a three-song demo, In Rock N Roll We Trust that was intended to turn into a full length album in 2008. Things don’t always work out quite as planned, but sometimes delays are worth the wait. The now Naples, Florida-based Hippocrites have finally created their full length debut, The Goodbye Waltz. While In Rock N Roll We Trust was a positive experience, The Hippocrites have certainly refined their sound in the past two years.

The Goodbye Waltz opens with "I Don't Have A Heart", a solid americana/rock tune in the Tom Petty tradition. Vocalist Jesse Como sounds more than a bit like Van Morrison, with a solid voice and a workman's delivery that is unaffected and appealing. "I Don't Have A Heart" makes a great transition between a verse that's anomalous to a wonderfully catchy refrain you'll be singing for days. "Hurricane" thoroughly reinforces the Van Morrison comparison in a song about the fleeting nature of love in an imperfect world. "Jesse James" climbs on the power of what you might call an ambling bass line and the powerful, emotive vocal line. James tells his story in autobiographical fashion through the song, a story that's both sad and unrepentant and intriguing in its passion. "Baby Blue" is the story of a lifelong rover who's looking for a home but can't seem to take himself off the road. The song has a pleasant melody that seems vaguely familiar on first listen.

"The Ballad Of Georgie Porgie" hits on a soul and funk vibe as a song of loss and remembrance with someone of a poor, pitiful me theme. It's a great arrangement, and Como is torturously emotive on vocals. He channels a bit of Adam Duritz on "Beautiful Girls", getting repetitive and a bit lost in the process even while providing a solid vocal performance. "Lie To Me Tonight" is a plea for solace in the face of impending loss. The song has a whiny, desperate feel to it that works well with Como's voice but isn't entirely a pleasant listen. The closing track "A Little More Time" attacks a similar concept with more grace and subtlety in a well constructed arrangement featuring great vocal triads over a gentle country facade.

Learn more about The Hippocrites at www.myspace.com/thosehippocrites.  The Goodbye Waltz is available digitally from Amazon.com

and iTunes.  CDs will be available soon.  Keep checking The Hippocrites' MySpace page for availability.
Posted by Wildy at 5:00 AM