Hydrovibe - Nothing Left To Lose 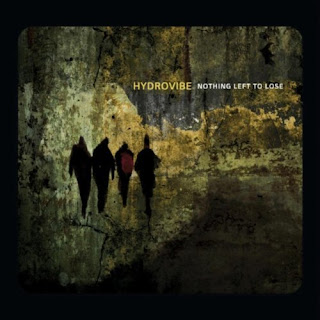 Hydrovibe has had their share of luck since vocalist Heather St. Marie and guitarist Mat Duzat began working together back in Louisiana. As the band finished recording their first full length album Nothing Left To Lose in 2006, they received notice that their song "Killer Inside" would be featured in SAW III. Quickly switching gears Hydrovibe cut a 5-song EP (including "Killer Inside") to take advantage of the publicity the song placement would bring. Four years later and Nothing Left To Lose finally sees the light of day. With production by Tom Fletcher (Ozzy Osbourne, Motorhead), mixing and re-tracking by Kenny Lamb (The Doors, Keane) and a mixing assist from Kevin Churko (Ozzy Osbourne), Nothing Left To Lose has lost little in the interim.

Hydrovibe opens with "Fifteen Minutes", a heavy anthem built on a solid hook and memorable chorus. Vocalist St Marie takes after the celebrity obsessed culture we live in, bemoaning a values system that places an individual’s fifteen minute of fame over almost anything. St. Marie has a voice that can blow you away or lull you into submission, with a dark tone that's gorgeous and scary all at once. "Disconnect Me" is a solid album track, full of great harmonies and a dynamic vocal line. After a solid start things get spotty for Hydrovibe. "Liberate" features some unusual song construction and really isn't a bad tune but gets a little too wrapped up in repetition. "The Devil Comes Disguised As A Friend" is the heaviest track on the album; high powered yet with a sense of control beneath the anger and vitriol.

"Shallow Grave" is an intriguing number. Solid vocal harmonies encapsulate real angst and stress in the arrangement. Unfortunately the song devolves into a repetitive template of pop/metal that will play well to Modern Rock and Edge radio, but fails to maintain the highly charged potency the song starts out with. Hydrovibe takes listeners on an interesting three song trip with "Reborn", "Suture" and "Fame". "Reborn" is a transitional bit of ambient rock; a slightly surprising turn from a band capable of rocking so hard. The song stands out more what it's not than what it is and is a nice change of pace. "Suture" is pure heavy fun, the sort of song that inspires teenage boys (and girls) to strap on a six string and start blasting out power chords. "Fame" bookends the experience with a big hook, tight arrangement and tremendous harmonies. In this moment Hydrovibe recalls the best of 1980's hair metal.

Realizing there are four songs at the end of Nothing Left To Lose, the review ends here, in acknowledgement that sometimes you have to know when to quit. "Contagious", "Evil Side", "Nothing Left To Lose" and "Liberation" add little to the experience (other than the album title). The songs aren't bad, they just don't fit here, and sometimes less really is more. Hydrovibe manages to create some great moments on Nothing Left To Lose, but a trimmer album (or even EP) would pack a lot more punch in terms of quality and continuity. This is a risk anytime an album sits for several years and is revisited. It would be curious to hear the original composition and sound Hydrovibe had at the close of the 2006 recording sessions.

Learn more about Hydrovibe at http://www.hydrovibe.com/ or www.myspace.com/hydrovibe.  Nothing Left To Lose is available from Amazon.com as both a CD and Download

CDs and merchandise are also availble from the band's webstore.  Digital copies are available from iTunes.
Posted by Wildy at 7:07 AM