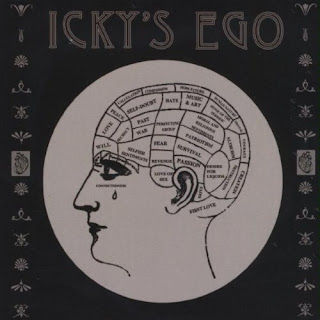 Somewhere in the playground that stands between the musical estates of The White Stripes, The Pretenders and Massive Attack you'll find the muse of Icky's Ego. The Los Angeles duo of Dave Crocco and Cela Scott create hard-driven rock n roll with ambient edge and a task-master's eye for detail. Their debut EP, Icky's Ego, features four songs that illuminate the band's vision of musical domination; a vision they recently took on the road to Europe for the first time.

Icky's Ego opens with "Citadel", a personal statement of power and strength in the "I am an island" tradition. Madness runs through this single in both visceral and real realms as Crocco's tortured vocals and Scott's whispered voices imply. "Girlfriend" finds Cela Scott at the mic for a wild ride through unrequited love from the other side. Scott lays it on the line for an impending lothario in no uncertain terms after a one night stand, drawing the line at time served. "Histrionics" is an aural picture of a hot mess in the first person; painted in a highly catchy arrangement that's danceable. There's a stream-of-consciousness element to this song that's not as random as it first appears. Cela Scott's vocal suggests the instability the song implies in a sharp vocal performance not to be missed. If you don't get this song on first listen give it a few more spins; it will grow on you. Icky's Ego closes with "Rome", which is something of a mess, sounding a bit more like Icky's ID than Ego. The song has a catchy core, and perhaps just follows the spiraling madness of the EP further down the chain, but it's the least accessible track on the album.

Icky's Ego is unique in purveying ingestible madness in distinctly affable alternapunk/pop forms. No label in the lexicon exactly describes Icky's Ego to a T. You'll simply have to listen for yourself. What can be said is that Icky's Ego makes a memorable impression. You'll want to follow Dave Crocco and especially Cela Scott on their march to madness.