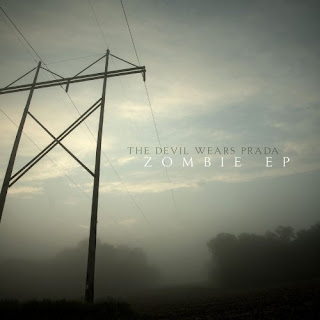 Ohio-based The Devil Wears Prada returned recently with their fourth release, Zombie [EP]. Zombie is a collection of five songs from the metal-core band comprised of five Christian musicians with a penchant for the hard stuff. Opening with "Escape", The Devil Wears Prada drops the hammer heavy and hard, nearly bridging the gap between today's metal-core and good, old-fashioned thrash metal. With a scenario that sounds surprisingly similar to the film 28 Days Later, The Devil Wears Prada will wear you out with a constant barrage of sound. "Outnumbered" cements the plot line, exploring a time where survival calls for behaviors that are counterintuitive or perhaps even run against our very natures. "Revive" brings you to the brink of death, only recovering when the will to fight back is discovered. The Devil Wears Prada finally draws back (a little) on "Survivor", a somewhat uncertain and unsettling heavy rock track that might be the best creation on the EP.

As with most metal-core recordings, don't bother listening without a lyric sheet. The screaming vocal lines are indecipherable to anyone with hearing that falls in the range of average human experience. The energy here is uncharacteristically violent; creating a sound that might be a turnoff to the bands less hardened fans. For those who remember Stryper, the Zombie EP from The Devil Wears Prada makes Stryper sound like Air Supply.

Learn more about The Devil Wears Prada at http://www.tdwpband.com/ or www.myspace.com/tdwp.  The Zombie EP is available from Amazon.com on CD