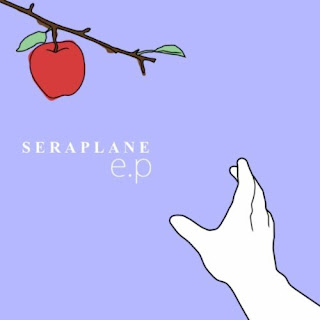 Jackson, Tennessee indie folk/rockers Seraplane grew out of the ashes of another band called Sangfroid. Singer/songwriter Sam Raines and multi-instrumentalist Landon Shivley took their collective muse and moved on, starting Seraplane in April of 2008. Other players have come and gone, but Raines and Shivley have remained at the heart of Seraplane. The duo dropped their first recordings in 2010, a five-song collection aptly named E.P.

E.P. opens with “Everything Is Getting Better”, a feel good tune with a bright outlook. Musically the song is very solid; lyrically it’s a bit awkward at moments, with Raines seeming to fumble for the right words. “The Rain” is a melancholic look at a relationship that’s fallen down. Raines is honest and forthright in his delivery, but the awkwardness noted in the first track is still there. “Apple” is a pining love song; a recklessly pining love song written from the depths of loneliness. Raines’ voice is perfect in its imperfections. As you listen to more of E.P. you’ll realize that awkwardness and discomfort that Raines projects isn’t so much incompetence as it is a mark of personality as a songwriter. This unaffected, inelegant lyrical style becomes somewhat charming the more you hear of it. “Story Left Untold” is the angst-filled rambling over something left undone. Seraplane closes with “When My Letters Are Few”, the sorrowful longing over a love past. Repetitive and steeped in the sort of circling thoughts that fill up the cup of grief, “When My Letters Are Few” looks to the past instead of the future.

Seraplane certainly has a distinctive sound; a sort of folky Michael Stipe-light, but instead of Stipe’s whine Seraplane features Sam Raines’ hopefully hopeless emotional pining. Seraplane will find their detractors, but the emotional honestly and simplicity in the songs on E.P. smacks of a basic charm. E.P. is a solid effort.

Learn more about Seraplane at www.myspace.com/seraplane.  E.P. is available digitally from Amazon.com and iTunes.