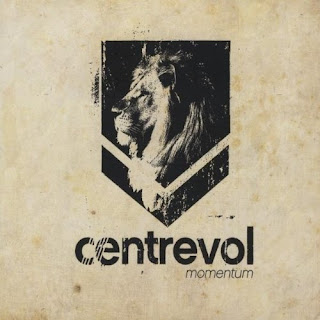 Long Beach, California rockers (by way of Boston) Centrevol made a splash with their 2008 debut album, the Wyn Davis (Sublime, No Doubt) produced Beggars And Thieves showed a propensity for grand rock songs with distinctive melodies in the tradition of bands such as U2, The Police, The Killers and Coldplay. Centrevol returns on September 29, 2010 with their third EP, Momentum. Produced by Eric Palmquist (The Ataris), Momentum is likely to be a self-fulfilling prophecy.

Momentum opens with "Don't Hear Me Wrong", showing off an open sound with great pop sensibility that's reminiscent of U2 (or U2 jamming with the Geoff Downes version of Asia. The chorus here is brilliant, the sort that catches attention on the radio. "Ready To Go" is a bit more mundane than the opener but is a solid album track "I Walk The Line" is an intriguing cover of the Johnny Cash classic that sounds very little like the original. Centrevol brings out a different feel in the song; where Cash's version was confident and proud, the version presented here is melancholy and resigned. "Save Yourself" is very catchy, and jumps right out of the speakers into your ears. Centrevol's ability to come up with these big choruses filled with ample hooks and harmonies bodes well. The best comes last, however. "Shine A Light" is a prospective love song; hopeful in a prayer-like fashion. Melody is king here, and even if the lyrics dance on the edge of trite at times the song works for what it is.

Centrevol overcomes the sophomore jinx with Momentum. Even with a couple of tracks here that just take up space, Centrevol exceeds all expectations by blending a distinct pop sensibility with great melodies and the occasional chorus that will simply blow your over. With the right luck Momentum could be a breakout EP on the strength of a few of the tracks here. Don't miss it.

Learn more about Centrevol at www.myspace.com/centrevol.  Get Involved drops September 29, 2010.  You can pre-order your digital copy from Amazon.com.  Expect wider availability both on CD and digitally soon.