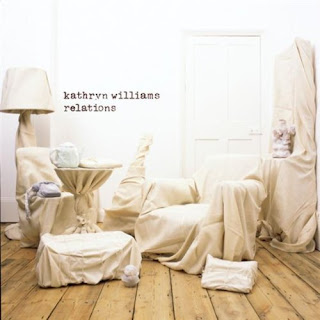 Not too long ago we received Kathryn Williams' The Quickening, a charming album that showed a deep sense of songwriting acumen and a highly focused performance style that digs deep into the moment of each song. On October 12, 2010, Williams returns with Relations, a collection of thirteen cover songs that finds Williams channeling her performing energies into the muse of others. In the process, Williams seems to get in touch with the inspiration of each songwriter and song while bending and blending each tune to make it uniquely here own.

Relations opens with "In A Broken Dream" (David Bently), with Williams delving into human emotions with a clinician’s eye. Her delivery is both feeling and clinical at the same time in a lyric, melancholy arrangement that captures and lulls the listener. "Birds" (Neil Young) is given a lovely reading here. Williams sticks with a simple arrangement of guitar with just a breath of strings now and again. It's a beautiful moment where the Young's poetry and the poetry on the instruments converge and intermingle as equals. Williams lights up the night with a cover of Big Star's "Thirteen", culling the innocence, angst and loneliness of a teenager in both Alex Chilton's lyrics and her own voice.

Williams takes Leonard Cohen's "Hallelujah" to another level, interpreting it as a reverent, secular prayer that's both carnal and at peace. Williams has already shown a talent for playing on dichotomies, and excels here in a remembrance of events both violent and tragic; human and divine. Williams throws listeners a delightful curve with Ralph Rainger's "A Guy What Takes His Time", teasing with gentle innuendo and the subtle delivery of an ingénue in a blues/folk arrangement that's absolutely memorable. Williams transforms Lou Reed's "Candy Says" into a dreamy art house ballad, surfing the musical seams of the song with a grace and strength that is impressive.

Stephen Malkmus' "Spit On A Stranger" is surprisingly charming and well-performed; you can almost hear Williams straining at the bit to break out and give this song a more solid airing out - the sort that can really only happen on stage. But the energy and the tension in this song are significant, making for an enjoyable listen. The most surprising, and gratifying performance on Relations is Williams' take on Nirvana's "All Apologies", a baroque lamentation on the pointlessness of life and human institutions that's even more stark and affecting that the original. While Nirvana's version was angry and wracked with social guilt, Williams makes it a sonic diagnostic with personal implications, both of the moment and outside of it. "Beautiful Cosmos" (Ivor Cutler) explores the atmosphere and comfort of knowing you are loved; a pleasant but somewhat awkward transition to the closing track, "These Days". Williams makes the most of the Jackson Browne tune in a love cover that amplifies out fear of change and our tendency to build shelves around our lives. Williams shows a British detachment and grace here that's both charming and distinctive.

Kathryn Williams makes friends on Relations with some under-represented nuggets from an impressive list of singers/songwriters. Perhaps the strongest quality Williams possesses with regard to covers is her ability to pay tribute to the original while crafting interpretations that are distinctly her own. Some of the songs here you might be hearing for the first time, and if so you'd never guess they didn't come from Williams' heart. For the songs you know, Kathryn Williams offers you an opportunity to re-imagine what you've heard and see it in a different light.

Learn more about Kathryn Williams at http://www.kathrynwilliams.net/ or www.myspace.com/kathrynwilliams.  Relations will be released in the US on October 12, 2010 on CD, but the album was originally released in 2004 in the UK.  You can pre-order the CD from  Amazon.com

, but the import version is actually a dollar cheaper than the US pre-order.  Digital is available from both Amazon.com and iTunes.