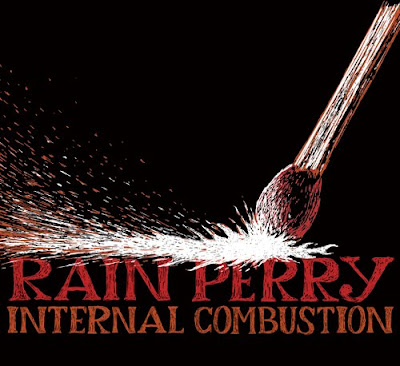 Rain Perry grew up in a Bohemian lifestyle that involved 20-something moves by high school. Born to free-spirited parents in California, Perry had the room to choose her own path as she grew, and particular with the development of her musical talents. Immersing herself early in the songwriting of Joni Mitchell, Randy Newman, Bob Dylan and Carole King, Perry has developed her own flair for a well-told story and well-constructed song. These tendencies have led to Perry winning the grand Prize at the 2000 John Lennon Songwriting competition in the folk category as well as having her song "Beautiful Tree" selected as the title track of the CW's Life Unexpected. Perry continues her confessional style on the folk/rock extravaganza Internal Combustion, due out September 21, 2010. Produced by Mark Hallman (Ani DiFranco, Carole King, Eliza Gilkyson), Internal Combustion finds Perry ruminating on inner motivations and how the force us to relate to the world around us.

Internal Combustion opens with the clinically personal anthem "The Compartmentalized Thing". It's a self-assessment on the ability to put your heart on your sleeve as a performer and then walk away and have a life away from the stage. Perry's voice is warm and wiry, having both a gentle quality that draws you in and a wiry strength that holds onto you once drawn. "Til It Shines" (Bob Seger) is a great read of a classic tune. Perry's rendition is subtle and full of quiet emotion, perhaps one-upping the original with a warmth and sweetness that Seger's rough-edged voice could just never convey. "Red Green White Blue" is all about seeking solace in your surroundings; in nature. It's offered up in a gentle arrangement that's poignant and sweet. Perry is in fine voice for "So You're The Muse". This is a song you might not take to on first listen, but it will grow on you with its searching needfulness and minimalist arrangement.

"Next Big Thing" is sort of a sociological observation on the primal draw of a young preacher wrapped in a gospel/blues arrangement. Focusing more on physical than spiritual "salvation", the song is spot-on in digging at humanity's yang and yin of corruption and rebirth. Perry's sense of humor comes fully out in the open on "Keanuville", an obsessive rumination on Keanu Reeves and his band Dogstar written from the perspective of his biggest fan. One of the true highlights of Internal Combustion is Perry's cover of Paul Simon's "Rene & Georgette Magritte With Their Dog After The War". Perry gives the song a lyric reading and is at her vocal best. Simon fans may find the arrangement of the background vocalists a bit jarring, and this is actually something of a distraction. Stripping this number down to just Rain Perry and piano without the backing vocalists would simply highlight how stellar a performance this is.

"A Perfect Storm" is an amazing ode to an old sea captain who's lost at sea and those he left behind, with a parallel drawn between the endless flow of the sea and of life. This is the best outright songwriting on the album. "Ambulance Song" plays like random thoughts reaching out to the survivors of an accident when coming upon an ambulance on the roadside. It's a great moment; warm and heartfelt and thoroughly uncharacteristic of your typical rock/pop album. Perry closes with a cover of Marvin Gaye's "Let's Get It On", singing it as more of a pure love song but still with the carnal intent. It's a highly appealing cover that could certainly garner Perry some licensing placements and perhaps even a place on the charts.

Rain Perry is exquisitely human on Internal Combustion, establishing an almost personal link with the listener while running the gamut of human emotion and imperfection. As debut albums go, this one is stellar. You might not see any big hits out of Perry this time around, but Internal Combustion is the sort of album that builds serious expectations for next time. And Perry might just have the goods to deliver.

Learn more about Rain Perry at http://www.rainperry.com/ or www.myspace.com/rainperry.  Internal Combustion drops on September 21, 2010.  Keep checking Perry's site for availability.
Posted by Wildy at 5:00 AM