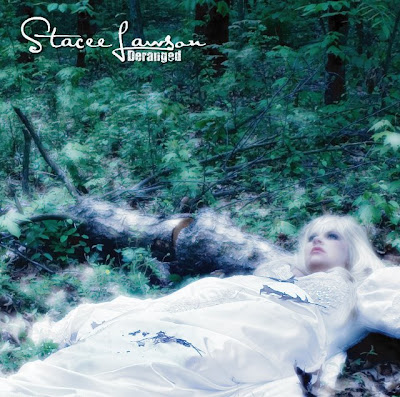 Listening to Deranged the first time reminded me of the first time I heard Jess Klein sing. Huntington, Virginia’s Stacee Lawson has the same sort of edge and urgency to her voice. The musical arrangements on Deranged as pure modern rock with the occasional nod to a 1970's hard rock sound. Run picks up on this retro sound as an envelope for Lawson's urgent vocals. This song is highly commercial and should do well as a rock single. Mr. Love has a bluesy feel to it and discusses longing from a distance.

Lawson also delivers a delicious cover of Edie Brickell's What I Am. It's a straightforward interpretation that's faithful to the original but very well done. Other highlights include Come Back Down and Hangin' On.

Stacee Lawson is a pop vixen with a rough edge. Deranged is a worthy debut album that establishes Lawson as a burgeoning artist with room to grow. Deranged is very much worth a listen or two, particularly if you like the mix of edgy and sweet in rock music. I suspect Lawson has a bright future in music, and Deranged is the first step.

You can learn more about Stacee Lawson at www.myspace.com/staceenl08. Deranged will be released on September 30, 2008 and is currently available for pre-order through Amazon.com.
Posted by Wildy at 5:05 AM

The album is great! Huntington is very proud of Stacee! The only thing wrong with your review is she's from Huntington, WEST Virginia! She's awesome!

Indescribable!!! this young lady rocks hard!!! No one to compare her to, she IS an original!!

I'm very biased, she is my cousin. That aside, even if I didn't know her, she has God-given voice and writing talents, we are all rpoud of her!!!!!

The CD is PRODUCED well, but live is another story. She relies heavily on backing tracks, and she just wasn't that impressive vocally or with her stage presence. She seemed to run out of breath before the end of each song.

Lat comment is not true. This cd is the first time she has ever used background vocals. She only used them on a few songs. SHe alos used to sing acoustic shoes by herself, so everyone knows she has true, raw talent. Maybe she just had an off night, or was nervous

I was stumbling across some of my reviews. and came up on this one. About background vocals......I do sometimes use them, as does almost every big artist. I f you listen to the cd and read the cd insert, the bg vocals are all me!!!! So basically when i use them I sing with myself. Duh!!!!! What is wrong with that. It makes the song fuller, and some of the songs have sound effects in the beginning. This is another reason I use them. Who ever made that comment obviously does not know shit about live shows, or does not pay much attention.