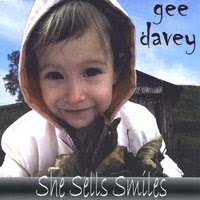 Named for the catch phrase from the old cartoon Davey and Goliah, Gee Davey has spent the last several years being one of the hardest hitting bands on Long Island. The band had a critical and college hit in 2006 with Sparticle but was unable to tour. 2008 sees the return of a revamped Gee Davey with She Sells Smiles, a six song EP with a more pronounced pop sensibility and a new lead singer (DJ Pearlman).

She Sells Smiles starts out with Say Another Prayer, a modern rock bruiser with punk roots. Last Song opens with a great guitar hook and an extremely commercial sound reminiscent of the Foo Fighters. Beautiful You is a gorgeous rock and roll ballad and sounds a little like early Pearl Jam. Trial By Self is my favorite song on She Sells Smiles. It finds Gee Davey musing in the acoustic realm and highlights just how talented these guys are.

If you like poppy modern rock with eclectic rhythms and inventive instrumental turns , Gee Davey is a band you need to check out. She Sells Smiles is an extremely solid release that should garner Gee Davey significant attention.

You can learn more about Gee Davey at http://www.geedavey.com/. You can purchase a copy of She Sells Smiles at www.cdbaby.com/cd/geedavey4.
Posted by Wildy at 5:10 AM