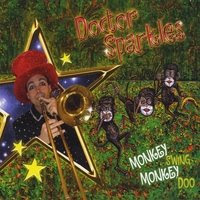 What do you get when you cross a ukulele and monkey doo? How about one of the best swing albums of the year? San Francisco's Doctor Sparkles, that over the top MD of uke swing, comes out swinging with his sophomore effort, Monkey Swing Monkey Doo. Cabaret Jazz is a serious art form, and must be undertaken with a light heart and a sense of humor. Doctor Sparkles appears to have found the right formula.

Come on, you mean he really plays a ukulele? Quite well, thank you. Doctor Sparkles is one mean uke player, and has a great cabaret/stage voice. There's an obvious sense of humor here, not to mention some first class jazz. Monkey Swing Monkey Doo is a real treat. Songs such as The Anahata display the charisma of Doctor Sparkles, not to mention the first class band he has behind him. The Golden Age Of Swing is a reminder of the roots of much of America's popular music for the last half-century. You'll need to check out the island swing of Gotta Dance, the freewheeling Monkey Love and the Gershwin-esque Just One Thing.

Other highlights include the politically pointed Another One Percent, Always Be There and the Elvis Presley inspired Fling Poo At The Zoo. Doctor Sparkles combines classic swing and early rock sensibilities in the same way Louis Prima and many other 1950's/1960's Vegas performers did. This is an exciting album that will play well to crowds of all ages. So step up and Fling some Poo.

You can learn more about Doctor Sparkles at http://www.doctorsparkles.com/. You can purchase a copy of Monkey Swing Monkey Doo at www.cdbaby.com/cd/doctorsparkles2.
Posted by Wildy at 5:05 AM

Yes, this is indeed a very good album. I like it better than his first one, "Sail Away" (and I own them both, so I have some basis for comparison).