CD Review: Power Of Country - See You In Rock And Roll Heaven 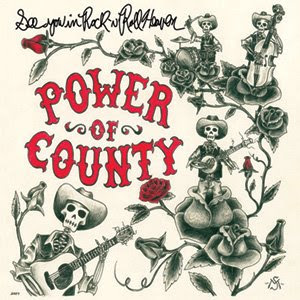 Power Of Country - See You In Rock And Roll Heaven
2008, Union Records

Portland, Oregon's Power Of Country remind me heavily of one of my favorite Alt-Bluegrass bands, Luther Wright And The Wrongs. There is a definite old-time country feel to a lot of their material and a strong rock sensibility as well. 2008 sees the release of Power Of Country's third album, See You In Rock And Roll Heaven. It's a winner.

Power Of Country throws down the gauntlet with Ain't Goin' Back To Jail, a punk-country tune with a driving chorus that will have your feet tapping. Love Machine is a humorous country rocker with some great guitar work. Love Me In Chains keeps the mojo rolling as a worthy urgent recollection. Different Seeds is a little more in the popular country realm (but not in the prepackaged, overproduced sense holding sway on Music Row). My personal favorite here is Trashville Rag, which shows off some great guitar action and tight playing as a band. Even in slower moments, Power Of Country is a more than competent band. Songs such as Father, Mother, Son and The Ballad Of Charlie Sad show a little more of the traditional country sound that Power Country does so well.

See You In Rock And Roll Heaven is a real treat! The mix of rock and roll/rockabilly with traditional country sounds and occasionally an almost punk rock attitude is a head-turner and definitely worth checking out. Power Of Country don't so much walk the line between genres as stomp all over them and then kick them a few times for good measure. This band is a pleasant surprise. Don't pass them by.

To learn more about Power Of Country head on over to http://www.powerofcountry.com/, where you can purchase a copy of See You In Rock And Roll Heaven.