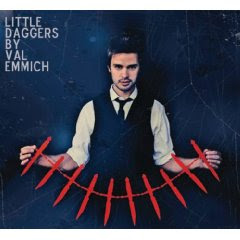 Val Emmich understands the art of war. In the end all battles come down to hand-to-hand combat, and it is in that setting that the ultimate message is sent from one side to the other. On Little Daggers, his sixth release, Emmich has crafted a collection of ten energetic pop/rock songs with deep and sometimes disparate lyrical currents. Each of these little daggers is designed to prick at your conscience or your thought process, but I promise you no blood will be drawn.

Little Daggers opens with The Lucky Ones, a bouncy, feel-good pop anthem on the outside while having a melancholy lyrical turn. Get On With It sounds as impatient as its name. Hurt More Later may be the class of the album -- an introspective and peppy look at the downside of love. Emmich moves on to a lilting waltz in Darling Denise. Other highlights here include Wake Up Brand New, the frenetically acoustic Down and the emotional rebirth of Catalyst.

Val Emmich reminds me of one of my favorite songwriters, Jason Plumb. Both have a distinct melancholy that runs through their songs even where the music is full of pep. Emmich keeps his songs compact and concise, all the better to drive the points home. Little Daggers is a thing of beauty. Listen in.

You can learn more about Val Emmich at http://www.valemmich.com/. You can purchase a copy of Little Daggers through Amazon.com.
Posted by Wildy at 6:31 AM