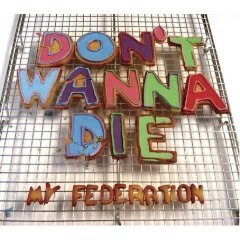 I have heard the future of British Rock and Roll. It sounds something like the progressive past of rock and roll melded with a Beatles-esque sense of melody, harmonies the Beach Boys would be proud of and enough energy to pogo dance for hours. Intrigued?

My Federation is from Brighton, England, and may have created one of the most infectious albums of 2008 in Don't Wanna Die. The album opens with the title track, a minimalist Prog Rock tune with an amazingly catchy chorus. This has first single written all over it and sounds like it would translate well into the clubs with the right remix. Open My Eyes sounds like Simon & Garfunkel wrote a tune with the Moody Blues and again has an incredibly virulent chorus.

My favorite song on the album is What Gods Are These. The mix of 1970's rock effects, a vocal performance that will send shivers down the spine of any Tom Waits fan and yet another chorus you can't shake from your head make this a potential commercial bonanza. This is the sort of song that in the right market and time could be a number one hit. It All Comes Clear changes tempo by falling into a Radiohead-inspired muse. The listener is then thrown out of their temporary reverie by Nothing To Say, a stark change of pace that sounds as Beatles inspired as it probably is.

Other highlights include the frenetic Honey Bee; the sonically diffuse new wave sounding Party Offender; the infectious Tom Tom (earphones recommeded) and Honey For The Soul. Truth be told, there isn't a weak track here.

My Federation walks on similar retro ground as Wildy's World alums Tally Hall and Woodward, but takes their retro muse in a slightly different direction. Hummable melodies combined with atypical song construction; strong harmonies and a definite ear for strong hooks and great lyrical turns make My Federation the total package. Vocalist Lee Muddy Baker could front most any band, anywhere, anytime. Don't Wanna Die is the sort of album to build a career around. This isn't any ordinary debut, it's a Wildy's World Certified Desert Island Disc. That title is well deserved.

You can learn more about My Federation at www.myspace.com/myfederation or http://www.myfederation.com/. You can pick up a a copy of Don't Wanna Die through Amazon.com, although you might be able to find it for cheaper if you hunt around the internet.