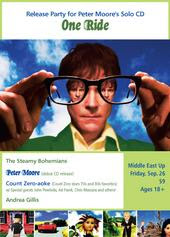 Peter Moore is one of the most accomplished and enigmatic songwriters to come out of the Boston music scene in the last twenty years. As songwriter for Think Tree and later Count Zero, Moore has been a cult hero to a couple of generations of Boston music fans while reaching far beyond the confines of Beantown. Moore was also the lead singer and keyboard player for Blue Man Group's Megastar Would Tour from 2006 until 2008. He might not sound familiar, but if you've ever played Guitar Hero I, II or Rock Band then you've heard songs from his band Count Zero. In 2005 Moore decided to develop and release a solo album based on material he'd been writing. 2008's One Ride is the culmination of this effort, and it's something you really ought to check out.

If Heaven Ever Knew calls to mind some of the great XTC records I listened to growing up while memorializing a crush. Drop'n Trou' is likely to be a cult classic with its 1970's vibe and comedic look at The Next Step. Drop'n Trou' is in competition with The Romance as favorite tracks here. Other highlights include Wicked Lies and all of the musical interludes whose titles begin with "Cycle".

Peter Moore takes a lot of risks on One Ride and most of them work. As a concept album about the life cycle of a relationship it lacks a little bit of cohesion, but as a collection of songs it's great listening. Moore plays virtually all instruments on One Ride and does all the vocals. He will no doubt continue to build his own part in musical history as part of his many projects, but be sure to take note of One Ride.

You can learn more about Peter Moore at www.myspace.com/petermooremusic. One Ride is an upcoming release. Keep checking Peter Moore’s MySpace page for release dates!
Posted by Wildy at 5:10 AM