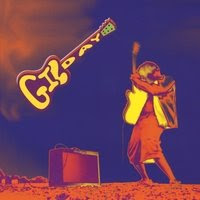 New York City’s Gilday has quite the Indie history in New York City, playing with bands such as Sheltercock, Gapeseed and Kill Your Idol), but on his solo debut has has some major help. Starting with producer Don Casale (Dionne Warwick, Iron Butterfly, Janis Ian, etc.), Gilday managed to attract some heavy musical hitters. Helping out are Richie Cannata (Billy Joel), Mario Staiano and Gerry Sorrentino (Savoy Brown) among a cast of many others. Gilday’s self-titled debut not surprisingly is a highly professional and market ready disc.

Gilday is an interesting figure. He sounds a little like Adam Duritz at times, and has occasional pitch issues, but is competent. The band itself is top-notch, playing a brand of pop/Americana that is pleasing to the ear. Check out Raining In New York, one of more commercially viable songs on the album. Other highlights include My Own Song; The Time Has Come; Hold On and Fire In My Eyes.

Gilday has a great sound that moves back and forth between rock and country while touching all points in between. He has an eccentric sound that will be instantly memorable. You'll either love his voice or not. Gilday ultimately is a pleasant listen without being exceptional. A solid effort.

You can learn more about Gilday at www.myspace.com/gildaymusic. You can purchase a copy of Gilday at www.cdbaby.com/cd/gilday.
Posted by Wildy at 5:00 AM