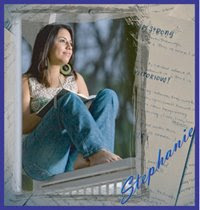 Ft. Worth Texas' Stephanie has been described as Jennifer Lopez meets Hillsong United. Whatever comparison you wish to make, she may be the biggest thing to come along in Contemporary Christian music since Jars Of Clay. I say this because her debut CD, entitled Stephanie, is probably the most commercially accessible Contemporary Christian Record I've heard since Flood.

Born in Miami, FL, Stephanie felt moved to write and record Christian songs after a personal epiphany in 2001. What is so interesting about this CD is that just based on the music alone there are 3-4 songs here that would have strong chart potential on commercial radio. This is unusual in the Contemporary Christian Music market where many artists struggle between message and music. For the most part Stephanie doesn't appear to struggle to make the music fit the words (or vice versa).

Wake Up Arise is a wonderful southern rock tune that will have your toes tapping within the opening bar. Through Christ is an early Bon Jovi-esque rocker that is irresistible. The Rain is a modern rock ballad that would be at home on the radio any day of the week. Now I Know shows the ability of Stephanie to emote in a slow song and outlines the sweetness and strength in her voice.

Back To The Rock is a driving rock tune you have to hear. Still Be Praising You is a love song that sounds like it could have come from a Broadway show. It's one of the rare songs here that gets a bit trite lyrically, but the melody is so gorgeous you can overlook it. The album closes with Bless Those Beside Me, my personal favorite here. This is the sort of song that has potential to become an anthem for Stephanie, and I have no doubt it will be sung in churches all over the country.

Look, not everyone who reads this blog is a Christian. We don't make any judgments about such things here. But even if you normally don't listen to Contemporary Christian music or have interest in the subject matter, this is a CD to listen to. Ignore the lyrics if you'd like, but this is a gorgeous pop album in its own right. If you do adhere to the Christian faith, then this disc is for you. It has the benefit of playing well across generations, and doesn't fall prey to many of the lyrical clichés or irregularities that often occur in CCM. I've debated this, but there's really no argument. Stephanie is a Certified Wildy's World Desert Island Disc. They don't get much better than this.

For more information about Stephanie check out http://www.iamstephanie.net/, where you can purchase a copy of Stephanie.
Posted by Wildy at 5:35 AM