CD Review: Kill Bosby - On Thursday We Leave For Home 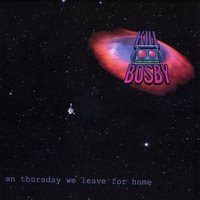 Kill Bosby - On Thursday We Leave For Home
2007, Kill Bosby

Concept albums have a long history in Rock and Roll, from the glorified (The Who's Tommy) to the reviled (Styx' Kilroy Was Here). Bands always take a tremendous risk in taking on concept albums. This commitment limits the range of material to a band in its writing and can cause musical strains trying to fit music and ideas together. Kill Bosby is a brave little band. In On Thursday We Leave For Home, Kill Bosby has crafted a succinct and musically interesting narrative based on the Twilight Zone episode of the same name.

Kill Bosby uses this story to highlight their use of tight harmonies, jangly guitar pop and soaring choruses to navigate the narrative. Today Is... begins the story with a musical vignette that suggests tedium turning to resolution and the stark excitement of Captain Benteen's castaways at being saved from their exile. DNA exudes the control crisis Benteen suffers on his way to extending his own self-imprisonment on V9-Gamma. The guitar and keyboard on this track have a distinctive 1980's feel to them.

Free is straight forward guitar pop and may be the most commercial tune on the album. Satellites & Submarines is probably the best song on On Thursday We Leave For Home. The combination of interesting dueling guitar hooks and lofty harmonies creates moments of musical beauty in the form of a vaguely maudlin song. The EP closes with I'm Leaving, a hopeful yet vaguely troubled epilogue to the television tale.

While the subject matter here is a bit unusual for rock and roll, the songwriting and execution are right on. Kill Bosby manages to break a Twilight Zone episode into five musical vignettes that managed to illuminate the story without overpowering or over-explaining it. On Thursday We Leave For Home is great pop music with a melancholy twist. This is required listening, particularly if you are a singer/songwriter who's ever struggled for writing ideas. Kill Bosby proves that the most mundane or esoteric ideas can be musical fodder when re-imagined from the right angle.

You can learn more about Kill Bosby at http://www.killbosby.com/ or www.myspace.com/killbosby. You can purchase a copy of On Thursday We Leave For Home at www.cdbaby.com/cd/killbosby.
Posted by Wildy at 5:05 AM