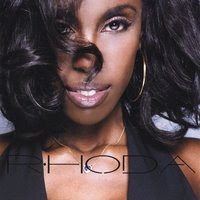 Uganda born, Washington D.C. raised Rhoda Nkojo grew up with a musical cornucopia at her fingertips. With exposure to Pop, jazz, Broadway, R&B, hip-hop and West African Rhythms, Rhoda has an unusually broad range of influences. Rhoda is known for stage work with New York City's Harmony Theater Company, as well as for providing vocals for New York's Loose Booty. In the meantime she's managed to acquire a JD from George Washington School of Law. Despite all of this she's managed to record and her debut album, Rhoda, which hints at many of these influences but stays strongly in the R&B/hip-hop realm.

Rhoda has a lovely voice, full of interesting textures. Technically she is proficient, occasionally falling prey to some sloppy runs but generally quite good. The material here is fairly generic R&B. It's a good listen, but Rhoda never quite distinguishes herself from the massive pop/R&B markets. My favorite track is I'm Nobody (Without You), which seems to bring out the best in Rhoda's voice. Fallin' is also a strong entry and opens the album. Other highlights include I Remember You and Check'd Out.

Rhoda (the person) is a talented singer with a sweet sounding voice. There as a few minor flaws here and there that are more a matter of training and breath control than an issue of talent and are easily rectified. Rhoda (the CD) is a pleasant debut that shows some promise, but never really establishes Rhoda as a musical force. You can hear the elements of a good performer on Rhoda, but they don't quite mesh the way you might hope. That aside I believe this recording has real value, as I believe it is a stepping stone to where Rhoda is headed rather than a culmination of her talent and work. It's the sort of first album fans may be buying for exorbitant prices on eBay a few albums down the road. Rhoda has that kind of potential.

You can learn more about Rhoda at http://www.rhodankojo.com/. You can purchase a copy of Rhoda at www.cdbaby.com/cd/rhoda.
Posted by Wildy at 5:00 AM