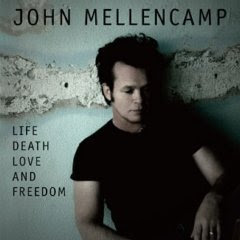 In a career spanning twenty-five plus years, John Mellencamp has seen the highs and lows of the music business. He's been a struggling artist and he's also been on top of the pop world. This parallax view of his own career has provided Mellencamp with perspective that many artists never begin to grasp. On his 2008 release, Life, Death, Love and Freedom, Mellencamp embraces a blues-informed Americana style to compel his ideas.

Sounding like a middle-American Bruce Springsteen, Mellencamp takes what has always been a prodigious talent for songwriting and sharpens his craft a step or two further. The album opens with Longest Days which just might be my favorite Mellencamp song ever. If I Die Sudden is a close second, with great acoustic blues guitar and charismatic vocals. Don't Need This Body is a Dylan-esque folk ballad and is very enjoyable. Other highlights include Without A Shot, Mean and A Brand New Song.

You can learn more about John Mellencamp at http://www.mellencamp.com/. You can purchase a copy of Life, Death, Love and Freedom at Amazon.com or at most major music retailers.