CD Review: Kick In The Eye - Sea Of Bitterness 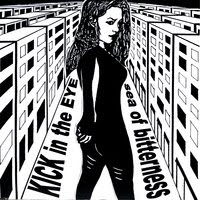 Kick In The Eye - Sea Of Bitterness
2008, Aftersound

Vancouver, BC seems to have a very dynamic live music scene that is capable of producing all styles of musical expression. Kick In The Eye is a glorious marriage of punk rock music with hippy counter-culture themes. Throw in the occasional modern rock confection and you have Sea Of Bitterness, Kick In The Eye's 2008 release.

Sonically Kick In The Eye is closer to punk than anything else. Melodies and vocals prize authenticity over accuracy and the songwriting is just a bit bumpy at times, but that's where the punk comparison ends. Punk Rock is based in profound rejection of authority and assimilation, whereas Kick In The Eye seems to embrace the modern dogma of Politically Correct rebellion. This contradiction is found a in a lot of pop culture at the moment and undermines the punk spirit and rebellion that is rock and roll.

That being said, Kick In The Eye makes enjoyable music, but are perhaps not as nearly counter-culture as they might think. Highlights include Red Army Overdrive, Back Off, Anytime and Bounty Killer Blues. Marian Lochrie's vocals sound like those of a young child, adding an ironic bite to the songs here that is not intended but is nevertheless notable.

Kick In The Eye presents themselves as being thoroughly anti-establishment, and yet site influences or beliefs that are as stringently marketable fascist movements as the movements they aspire to contain or sabotage. While much of the message Kick In The Eye looks to convey has merit, the arguments themselves are often built on the same marketing tactics and half-truths that they deplore. This takes power from the music and leaves us with a pleasant album that is vaguely impotent in message.

You can learn more about Kick In The Eye at http://www.kickintheeyemusic.com/. You can purchase a copy of Sea Of Bitterness at www.cdbaby.com/cd/kickintheeye4.
Posted by Wildy at 5:00 AM