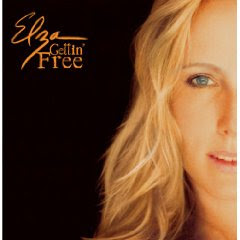 Elza is a product of the world. Growing up splitting time between her mathematician/musician father in Germany and her visual artist mother in South Carolina, Elza learned early to appreciate music and culture. With that background and exposure to different cultures through travel, Elza has always managed to march to her own drummer. On her fine 2008 EP, Getting’ Free, Elza breaks down a wall or two.

Gettin' Free is about letting go of inhibitions. Elza lets go of not only inhibitions but also pop music boundaries as she dances on the edges of pop, reggae and R&B. A fair description of Elza might be Sheryl Crow with soul. They write about similar themes and Elza does have a similar vocal tone. Gettin' Free starts out on the fringe with the title track and This Is Love (complete with Island beats). She does move to the center of straightforward rock with My Romeo; Boys, Boy, Boys and Heat. What moves the album along is Elza's voice, which is distinctive and sultry and everything you'd want to match the material she sings here.

Other highlights include La La La; Charleston Corner (hello Norah Jones), Wide Open and the honky-tonk flavor of Cheap Apple Wine. You & Me Now is the most poignant and lovely song on the album, and makes for a great Americana/Country song. Gettin' Free is a bit uneven and seems to lack some of the cohesion one expects from an album, but there are some great songs here. And even the average material is made better by Elza's voice. This is a strong effort and deserves to be herd.

You can learn more about Elza or purchase a copy or downloads of Getting’ Free at http://www.elzamusic.com/.
Posted by Wildy at 5:05 AM