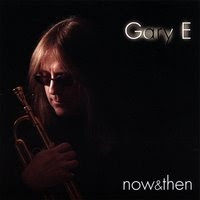 Gary Edelburg is a fabulously talented multi-instrumentalist whose primary instrument is the Trumpet. He has studied under Lee Konitz as well as at Berklee School Of Music. His prior credits include work with several bands as well as composing music for PBS documentaries. His second release, Now & Then, displays a penchant for reserved musical theatrics and a conservative approach to composition that is classy and distinct.

Now & Then opens with Partly Sonny, featuring Ken Schwab on Rhythm guitar. Schwab breathes a funky life into this tune, while Gary E. channels Chris Botti channeling Sonny Rollins. Ken Schwab is a definite asset to Gary E. throughout Now & Then, appearing on three of the seven tracks. Schwab brings a tension into the songs he's involved with that Gary E. seems to consume and feed off to great effect. Return Of The Toads Of The Short Forest is mellow dinner music and stands in counterpoint to the Zappa tune from whence the title comes. This is a pleasant listen but at times lacks the tension/energy seen elsewhere on Now & Then.

The title track, Now & Then, also includes Schwab on guitar, and the funk is engaged again. This is an example of the musical soul mates at their very best. There is just something about the pairing of Gary E. & Ken Schwab that lifts them, individually and collectively, to a higher musical plane. Gary E's interpretation of Wade In The Water is reverent and inspired, riffing on the melody line to a bed of jazz/funk construction. Wade In The Water qualifies for the label Lite Jazz and would do well on radio stations that embrace that format.

Heading Home is the third and final song that features Schwab and is a change of pace from the other two. Heading Home has more of a Jackson Browne ethic to it. Gary E is reserved here, and Schwab's guitar playfully dances around as it teases the trumpet into fuller recognition. Fuse is Gary E. solo, and has an ethereal yet electronic flavor that is almost reminiscent of Delirium (were they to play Jazz). This is true for approximately the first minute of Fuse, after which the song devolves into a chromatic morass of dissonant sounds. Fuse then evolves again into the main theme, which is about as mainstream jazz as you can get. The aural picture is one of extreme conflict that is played out in the music as it careens from harmonic comfort to cognitive and musical dissonance (and back again).

Now & Then closes out with Wild Mountain Thyme, a traditional tune arranged by Gary E. This is far and away the most beautiful track on the album. The liner notes indicate Gary E. arranged Wild Mountain Thyme, but rather than try to recreate it he chose to step out of the melody's way and let it be what it is. This is the mark that distinguishes a good musician from a great one.

Gary E. possesses a distinctive vision that comes through in his music. It is a pursuit of beauty in simplicity; allowing the notes and the spaces in between to speak for themselves. On his own he is an impressive writer/arranger/instrumentalist; in conjunction with Ken Schwab on guitar he comes a magician who spins instrumental yarns that wrap you in their staves and carry you along. Now & Then speaks to both the simplicity and the beauty of music, with a little funk on the side.

You can learn more about Gary E. at http://www.electricshadow.com/. You can purchase a copy of Now & Then at www.cdbaby.com/cd/garye2.