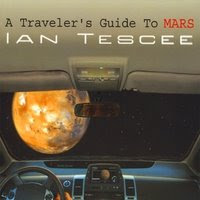 Colorado's own Ian Tescee (pronounced T-C) is a maestro of space music. Eschewing the usual formless, melody-less new age spread favored by many space music composers, Tescee actually builds his compositions around strong melodies and rhythms. His fourth album, A Traveler's Guide To Mars has the distinction of being the soundtrack the Mars planetarium production at Carnegie Science Center's Buhl Digital Dome in Pittsburh, PA.

Ian Tescee is a space junky with distinct musical talent. Aside from his compositions he has produced projects as diverse as Phil Keaggy's Acoustic Sketches and Jag Panzer's Ample Destruction. His compositions are filled with an inner light and grace that are unusual in electronic music. It's as if Tescee's love of his subject matter and the music shines through the synthesized sound he creates. Highlights on the album include Dust-Red Sky, God Of War, the New Wave SpaceTourist Mars and The New World.

You can learn more about Ian Tescee as well as purchase a copy of A Traveler's Guide To Mars at http://www.musicphrenia.com/ or http://www.iantescee.com/.
Posted by Wildy at 5:10 AM