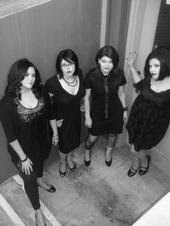 Moscow is a 4-member all female alternative rock band from Los Angeles. Their sound is halfway between Hole and The Cure, a sort of semi-depressed slow-core drone that ebbs and flows from song to song. Their self-titled debut CD will be released in 2008 independently and may find a niche with goth and new-wave fans.

I'll be honest; this is not a disc where you spend a lot of time talking about highlights. That's not a knock on the disc; it's just the style of music. The intent here is more of a consistent musical focus that spurns dynamism for a grinding (if not terribly heavy) motif. This is mellow rock rave music with a dark but not evil heart. Shadows and shading dominate throughout, and sudden tempo changes invade the music at odd times to create a sonic disturbance that is almost emotional. Favorite songs here are Scissors; Snow; The One and 2AM.

Moscow is not for everyone. It is slightly disturbing and rhythmically atypical of its genre. Moscow finds the movement in minutiae and odd time signature changes. Vocal dynamics and chord changes are left for occasional moments rather than as integral parts of the song, and melody is nearly an afterthought to the consensus of musical inertia, but Moscow are unique and interesting in their failure to comply with the rules and dictums of pop music. One gets the sense that this is truly a case of marching to a different drummer rather than being different to be different. Moscow’s self-titled album is an interesting study with unusual choices that will find its mark with enough fans to keep Moscow making music for some time.

You can learn more about Moscow at www.myspace.com/thisismoscow. Contact Moscow through their MySpace page for purchase information.
Posted by Wildy at 5:10 AM